You are here: Home / National News / Police Clash with Pakistan Protesters Results in One Death and Hundreds Injured 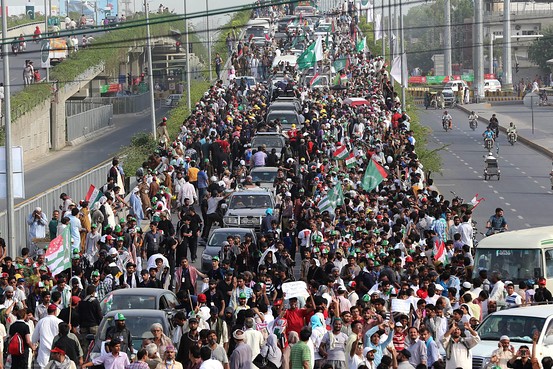 During a protest in Islamabad, where protesters attempted to march on the residence of the Pakistani prime minister on Saturday evening, at least one participant died and hundreds more were injured after protesters clashed with police officers.

According to Dr. Wasim Khawaja, senior hospital official, the protester who died, Naveed Razzaq drowned in a ditch when the crowd was attacked with tear gas. Medical officials explained that over 300 protesters were wounded during the clashes, after police officers responded to the protest with tear gas, batons and rubber bullets.

The stakes have been raised in the political standoff where the resignation of Pakistani Prime Minister Nawaz Sharif is the ultimate prize. Imran Khan, cricketer-turned-politician and cleric Tahir-ul-Qadri are the leaders of twin protests that have repeatedly demanded the resignation of the prime minister.

Protesters allege massive voting fraud and say that it’s because of this fraud that he was brought to office last year, during what should have been the first democratic transfer of power in Pakistan.

Government negotiators keep trying to convince Khan and Qadri to cease their protesting while Prime Minister Sharif is backed by parliament and political parties and refuses to step down.

Protesters have started regrouping and are repeatedly attempting to reach the Prime Minister’s residence despite the heavy deployment of police and barricades.

According to Khalid Khattak, police chief in Islamabad, the protesters had not only brought hammers, wire cutters and iron rods but even a crane.

Women and children were also harmed during the protests and the government hospitals in the Pakistani capital received hundreds of people that needed medical attention.

At the Pakistan Institute of Medical Sciences, 182 people were treated (including 37 police officers), and another 152 injured were treated at another hospital near the place of the clashes.

Protests began on the 14th of August in the city of Lahore on Independence Day and they soon reached the Islamabad. While Khan and Qadri have called upon millions of protesters to join their quest, crowds have thankfully not exceeded tens of thousands of participants.