You are here: Home / Business / Obama Promised More Than $33 Billion in Public and Private Investments in Africa

President Barack Obama sees Africa’s fast-growing economies as a great opportunity for U.S. companies to expand their investments. Companies such as Coca-Cola, Marriott Hotels and General Electric expressed their interest in investing as soon as their governments decrease corruption and human rights abuses.

Obama promised more than $33 billion in public and private investments in Africa, thus directly competing with China’s similar intentions, as thy have previously sought access to African markets for oil and other natural resources. Other nations and regions that began engaging Africa include Europe, Japan and India. 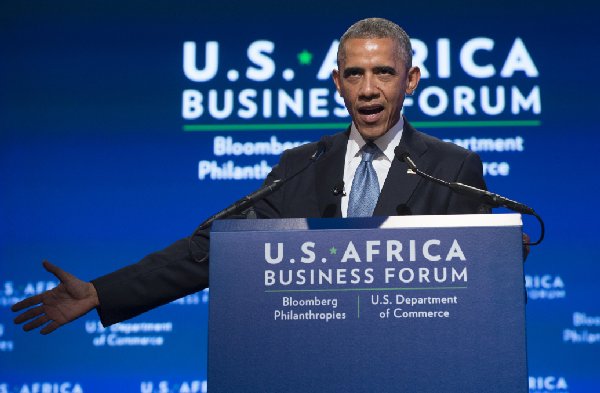 The problem, according to officials, is that Chinese investment comes into African countries without pressure for democratic governance or demands that countries crack down on corruption.

However Obama put things in a different light. “We don’t simply want to extract minerals from the ground for our growth,” Obama told the gathering of African leaders and business leaders from the U.S. and Africa. “We want to build genuine partnerships that create jobs and opportunity for all our peoples and that unleash the next era of African growth. That’s the kind of partnership America offers.”

“The United States is determined to be a partner in Africa’s success — a good partner, an equal partner and a partner for the long term,” Obama said in a speech to business executives during the first ever U.S.-Africa summit in Washington.

GE, for instance, will invest $2 billion to develop its supply chain, train employees and improve infrastructure and sustainability in Africa by 2018.

Another theme of the summit related to human rights, as US officials also lectured African countries about the virtues of democracy. However they were more interested in the security against terrorism and economic development. “It’s been enormously disappointing,” Kenneth Roth of Human Rights Watch said. “Promotion of human rights and democracy is very important to this administration, but only after it gets done promoting security issues and business.”

The $33 billion commitment is divided as follows: $14 billion in investments by private companies, $7 billion in financing to promote U.S. exports and $12 billion for an initiative to double availability of electricity in sub-Saharan Africa. About 70 % of the population lacks electricity.

Nearly 50 African heads of state, more than 300 government officials and representatives from more than 90 U.S. and African companies are gathered in Washington this week for the U.S.-Africa Leaders Summit. White House officials said the Ebola outbreak, along with the other remaining international crises across the globe in Ukraine, Iraq and the Middle East, should not detract from the summit.