You are here: Home / National News / Obama Praises the Progress Made in Iraq and Calls for Calm in Ferguson

This week President Obama was faced with several violent crisis. One of them represents the case of the 18-year-old African-American teen who was shot by a police officer in Ferguson, and the second one is related to the situation in Iraq. As a response to these two issues, the president will be dispatching Attorney General Eric Holder in Ferguson, to monitor the situation, and hopefully calm spirits. 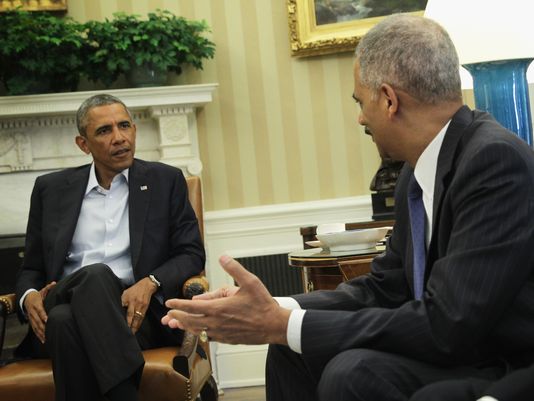 While the shooting of an unarmed teenager is no minor problem, Obama believes that the solution isn’t attacking and looting the police

“They are damaging the cause, not advancing it.” – President Obama

A few hours after briefing Eric Holder about his new assignment, Obama called for calm once again. He also said that the people of Ferguson should try to maintain peaceful protests by pushing back the “small minority” which is threatening with violence.

“Let’s seek to heal rather than to wound each other.” he said at the White House

In the meanwhile, Missouri Gov. Jay Nixon called for the National Guard to protect peaceful community members against violent outbursts. The curfew which he set was also ended.

The President believes that the only way to solve the problem is by addressing the “gulf” that exists between minorities and law officials. For this purpose he urges the police to re-examine its use of military equipment, and finding a way to deal with the protests peacefully (with less national guards).

“I’ve asked that the Attorney General and the U.S. Attorney on the scene continue to work with local officials to move that process forward,” Obama said. “They will be reporting to me in the coming days about what’s being done to make sure that happens.”

As far as the Iraq military situation is concerned, Obama ended a day of briefings at the White House. He believes that the re-capture of the dam near Mosul is a great breakthrough. If control of the dam, and water supply couldn’t have been secured, the results would have been catastrophic for the population.

“Let’s remember ISIL poses a threat to all Iraqis, and to the region.” – Obama said

President Obama also praised the Iraqis for their cooperation and support and believes they are making great progress on forming a inclusive government even as it battles with the Islamic State militant group (ISIL).

Although no timeline could be put on the attempts to subdue ISIL, the U.S. forces are on alert for “mission creep” in Iraq. Combat troops will not return on the ground of Iraq.