After the beheading of the American journalist by Islamist extremists, U.S. President Barack Obama expressed his revulsion at the violence of the IS group and vowed that the United States would do all in its power to protect its citizens.

The American President went on to describe the IS group as a cancer that revolves around a bankrupt ideology.

On Wednesday, the Pentagon released information that U.S. military had conducted 14 airstrikes in the proximity of the dam at Mosul, where they destroyed or damaged IS militants’ Humvees as well as other vehicles or military equipment. 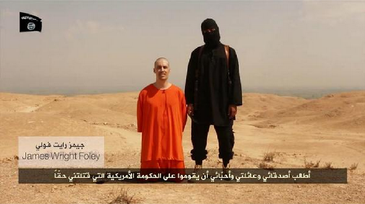 The news of the American journalist that had been beheaded came when Islamic State militants released a video on Tuesday, showing the act itself. James Foley had been a revenge murder meant to teach the U.S. not to meddle in the internal affairs of Iraq. The video was also designed to warn the US to not repeat airstrikes in Iraq.

All the video managed, however, was to create yet another reason for which Western powers could rationalize military action against the group.

As soon as the news was made public, U.K. prime minister interrupted his vacation while the English intelligence agencies were trying to identify Foley’s killer.

In the meantime, France urged other countries to coordinate an international attack against the Islamic extremists that have been terrorizing citizens of Iraq and Syria.

The video that was released on Tuesday only offered Obama bleak options as to the American involvement in Iraq. During his statement, the U.S. President not only condemned the violent actions of the extremist group, but also accused them of torturing, raping and subjecting women and children to unspeakable cruelty.

Obama insisted that the ISIL group shouldn’t be considered as a group that stands for any religion, as no faith could command its followers to massacre countless innocents. He added that what militants did on Thursday and what they continue to do day in and day out has no religious justification and should be punished with the utmost severity.

After hearing Obama’s statements and his belief that ISIL does not put value on human beings or ideologies of any kind, the U.S. Secretary of State, John Kerry, also stated that the United States would not back down when facing such an evil. He stated that American efforts would be unending in the attempts of eradicating the wickedness that the Islamic State and that those responsible for these atrocious crimes would be held accountable for their actions.