You are here: Home / Health / Ebola Claims the Life of Nigerian Nurse

Wednesday was a day of silence when Prof. Chukwu Onyebuchi, the Minister of Health, announced that five Nigerians had been infected with the Ebola Virus. They had contracted the virus from the late Patrick Sawyer.

In total, Nigeria has now recorded 7 cases of the disease (including the nurse and the Liberian who are now dead). The other five patients are currently being tested and treated in Lagos, and are kept in isolation.

According to the Health Minister, the nurse that had attended the Liberian infected with the Ebola virus is the first Nigerian to die of this illness. The minister also noted that each patient that is currently being treated has had direct contact with patient zero. An emergency operations center working around the clock will be fully functional on Thursday, the Minister added, and will be headed by Dr. Faisal Shuaibu. 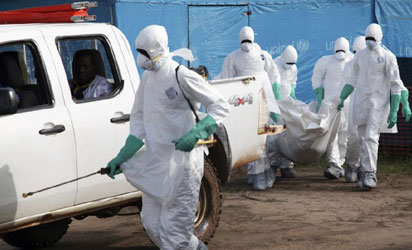 In completing the setup for the treatment center that will be opened on Thursday, Dr. Shuaibu will meet up with experts from other agencies as well as other personnel from Lagos State Government and the Nigerian Centre for Disease Control. The Health Minister explained that in order to have the operation functioning smoothly, additional health personnel will be recruited.

Currently, the Ministry of Health is making arrangements to ensure that their treatment center is working perfectly. This involves procuring isolation tents (as isolation wards are not available in all federation states) and the ministry desires to quicken the pace of providing proper isolation for patients.

After the two infected Americans have received the experimental serum for the treatment of Ebola, ZMapp, the Nigerian government immediately contacted the United States Center for Disease Control and Prevention to request the drug for the patients that are currently being treated in Nigeria.

Moreover, government in Nigeria has urged doctors who have been on strike for the last seven weeks to consider returning to action, as their requests have all been met.

The Ministry informed the public that hygiene is of utmost importance, urged them to avoid handshakes whenever possible but explained that wearing masks and gloves was not necessary as health personnel is the most vulnerable. He stressed that the government is in full right of quarantining anyone who is suspected of having Ebola for the sake of public interest.