Recently, Google has revealed that it has been working on flying drones designed to deliver aid to unreachable areas following natural disasters.

As part of Google X, the technology research department of the multibillion dollar company, Project Wind has been underway for over two years. The same department has also created the self-driving car. 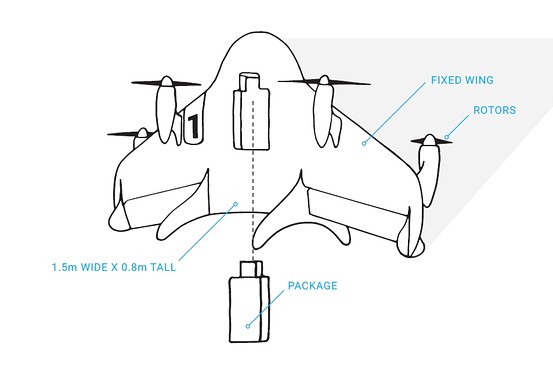 According to Google, the items had been selected after several conversations with local people. They spoke to emergency service teams, fire crews and even farmers in the attempt of identifying what may be best and how aerial deliveries could assist them in their jobs.

Google reported that for the first ever flight of their groundbreaking drone, they chose Cherry Ripe chocolate bars as the cargo. They flew the chocolate bars to a remote farm located 1km away. After only a few minutes, the drone flew in and gently lowered the chocolate bars to the delighted farmer who would otherwise purchase his favorite snacks in a town nearly 10 km away from his home.

The farmer then joked over the radio saying that his dogs were jealous that he had received treats and they hadn’t. As a result, the Google team soon obliged and the drone was back at the farm, this time delivering doggy treats.

The vehicle uses four rotor blades that allow it to hover 60 meters above obstacles. Consequently, the drone would not collide with power lines, trees or houses. It has a wingspan of 1.5 meters and is .8 meters long. The drone is equipped with a small compartment that is used to transport the goods that must be delivered.

While Google has developed the vehicle as a solution for disaster victims who require immediate assistance in inaccessible areas, they also admit that the drone could make day-to-day life much easier.

What the company is now focusing on is solving some issues with the safety systems (precisely, they want to teach vehicles to navigate around each other), precise navigation (the company desires to be able to deliver to an exact spot, no larger than a doorstep), noise reduction of the vehicles and end-to-end delivery systems.