You are here: Home / National News / Ferguson Riots Turn Calmer as the National Guard Pulls Out

After the two weeks of racially-charged protests, Missouri’s governor has finally ordered that the National Guard troops retire from the town of Ferguson. Tensions have eased at the end of the two weeks during which residents had taken part in violent protests after the fatal shooting of Michael Brown, the unarmed black teenager killed by a police officer.

Thursday marked the second day of violence-free protests in a row and was the calmest night in the two weeks since Michael Brown lost his life. 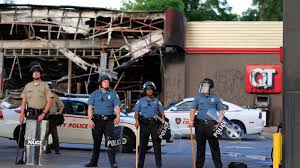 Brown’s father urged all protesters to return to their normal lives even as they were returning to the streets for peaceful demonstrations. While he thanked all of them for the support they had shown, Michael Brown Sr. criticized the actions of thugs and agitators who had turned the peaceful protests into violent events. According to him, such actions only put Michael’s name to shame.

Until Thursday, nightly rallies were punctuated by other lawless actions such as vandalism, looting and fights between protesters and the police. The situation escalated to such extents that authorities were forced to use tear gas and arrest dozens of protesters.

The entire situation made Ferguson, a 21,000 people community, become the face of the often-troubled racial relationships in the U.S. While the town is predominantly African American, tis police department, political leadership and school administration is dominated by whites and the death of the unarmed African American teenager was the boiling point of years during which police unfairly targeted blacks.

Authorities have been asking protesters to maintain order as protests had been turning increasingly violent. A curfew was also enforced so as to make sure that demonstrators wouldn’t be on the streets after dark.

In recent days, crowds have grown thinner and protests have become more peaceful.

Captain Ron Johnson, State Highway Patrol Captain believes that the situation is finally starting to turn a corner. He is an African American officer that was placed in command last week.

During Thursday’s protests, Johnson and his colleagues mingled among protesters and while the evening wasn’t similar to previous protests, incidents did occur. Several arrests were made by the police, as they identified people who were suspected of also instigating earlier protests.

Governor Jay Nixon ordered the National Guard troops to begin retreating from the community after they had been deployed at the height of disturbances to help local police officers. The troops kept a low profile during demonstrations as Nixon stated that improvements are evident.