You are here: Home / National News / Mount Sinjar Still Host to Tens of Thousands of Yazidis

In spite of President Obama’s statement in which he explained that U.S. involvement wouldn’t be required to help rescue the Yazidis that are still trapped on the mountain, it seems that many refugees are simply unable to reach safety unaided.

As the Yazidis who are still on mount Sinjar are either elderly, very young or sick, there isn’t much hope that those who are too weak to complete the trek to safety can actually reach the Kurdistan region in northern Iraq. 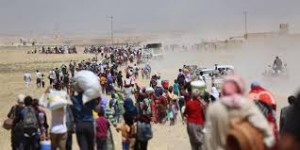 On Wednesday, Farhad Atruchi, the governor of the Dahuk province in Kurdistan, received the information that around 15,000 more Yazidis would be arriving soon and that he should prepare to receive the refugees that should have been airlifted from mt. Sinjar by U.S. military.

According to recent information, U.S. military officials had landed on Wednesday on Mt. Sinjar and confirmed that the food and water supplies that the U.S. had sent were reaching those who needed it. These officials also added that there had been a long evacuation process, in which thousands of the refugees had been leaving every night.

As a result, President Obama feels confident that U.S. forces have effectively improved the situation on the mountain and stated that Americans should truly be proud of themselves. Obama added that Mount Sinjar is now free from the ISIL offensive that had been taking place last week.

The president explained that airstrikes would continue, so as to ensure the consolidation of US positions, personnel and facilities. He also added that military assistance on the U.S.’ part will be increasing but that such missions don’t mean that the U.S. will be sending ground troops to Iraq.

An assessment was made by the U.S. military and, during the time when U.S. militants were there, they noticed that many of the stranded Yazidis on the mountain were children incapable of walking the distance to safety. These children were left behind by their relatives.

U.S. militants noted that the health of refugees had been deteriorating due to the harsh conditions in which they find themselves: living out in the open, small food rations or no access at all to food or water.

Atruchi asks himself why the international community is witnessing all these atrocities and isn’t doing anything to stop them. His question is how people will feel when they start hearing that the mount Sinjar refugees have begun to die, especially the children.