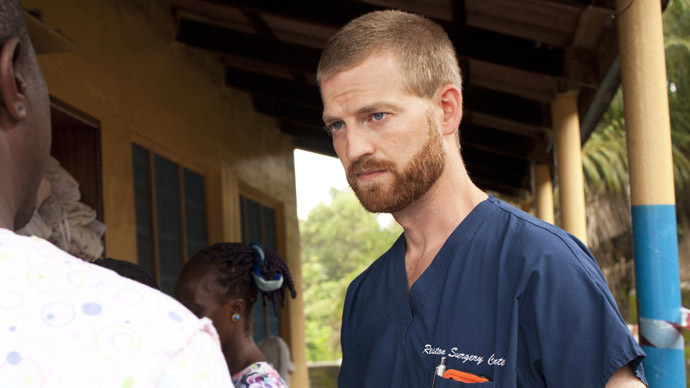 The American doctor who contracted Ebola treating victims of the deadly virus in Liberia, Kent Brantly, 33, was released from an Atlanta hospital Thursday.

Both Brantly and Nancy Writebol were flown out of the West African nation of Liberia earlier this month and have been getting treatment for the deadly disease in an isolation unit at the hospital. The two were infected while working at a missionary clinic outside Liberia’s capital.

Both were given ZMapp, a trial drug used on a handful of patients in the West African outbreak, and flown to the United States this month. The Ebola outbreak has killed 1,350 people and counting across West Africa. Fortunately the virus is not airborne; it is transmitted on direct contact with the bodily fluids of sick people experiencing symptoms.

Brantly was released from Atlanta’s Emory University Hospital, according to a statement from Samaritan’s Purse, who he worked for. “Today I join all of our Samaritan’s Purse team around the world in giving thanks to God as we celebrate Dr. Kent Brantly’s recovery from Ebola and release from the hospital”, Franklin Graham, president of Samaritan’s Purse said.

Brantly was expected to make a statement at an 11 a.m. ET news conference. Writebol, 59, is also expected to be discharged from the hospital’s isolation unit, but it was not clear whether she would also leave the facility or remain under supervision.

No licensed treatment or vaccine is available for patients suffering from Ebola. Nevertheless the World Health Organization (WHO) has advised that the use of experimental drugs is “ethically acceptable” under the exceptional circumstances of the latest outbreak in West Africa.

ZMapp is reportedly a mix of three monoclonal antibodies that help bind to and inactivate the virus. The antibodies are also thought to highlight cells infected with Ebola to the immune system, resulting in their destruction. The monoclonal antibodies are produced by tobacco plants that are capable of expressing foreign proteins, and are cultivated indoors under tightly controlled conditions. ZMapp only determined the current antibody combination in January after efficacy studies in monkeys conducted by the Public Health Agency of Canada.

“I know that Dr. Brantly and his wonderful family would ask that you please remember and pray for those in Africa battling, treating and suffering from Ebola. Those who have given up the comforts of home to serve the suffering and the less fortunate are in many ways just beginning this battle,” Franklin Graham added.