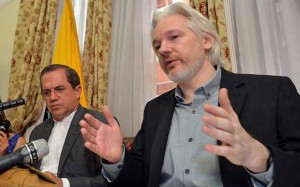 It is claimed that Julian Assange, WikiLeaks founder, is suffering from a potential life-threatening heart defect, along with a chronic lung condition. He is currently inside the Ecuadorian embassy in London and has been for two years, to avoid imprisonment.

He is unable to seek hospital treatment because he fears he will be arrested if he leaves the embassy, it was reveals by the man’s supporters. Assange has been living inside the Ecuadorian embassy in Knightsbridge in London since August 2012, when he was granted diplomatic asylum.

If he steps outside the embassy, then the British government has the right to extradite him to Sweden, after an European Arrest Warrant was granted in relation to an investigation related to sexual assault. Met police were given strict orders that they should arrest Assange, the moment he leaves the building. They’ve been stationed outside the building since 2012.

Assange fears that once in Sweden, he will be extradited to the United States, where he could be imprisoned for up to 35 years in prison for making public classified documents related to the Pentagon’s activities in Afghanistan and Iraq.

After two years inside the building, not being able to go outside, Julian Assange is believed to suffer from high blood pressure, a chronic cough and irregular heartbeat. A deficiency of vitamin D, which is gained from exposure to sunshine, could also be damaging the man’s health and could cause a series of severe health issues, including, diabetes, asthma and even dementia.

The Ecuadorian embassy asked the Foreign Office permission to transport Assange to hospital inside a diplomatic car, but they have not received any response and He would come round handcuffed to his hospital bed.

Assange is staying fit inside the building with the help of a former SAS veteran, who is his personal trainer. He also plays a bit of football in the corridor, to keep up his flexibility.

Julian Assange has made sure the public knew his opinion on the huge amount of money spent on trying to police him, which has now surpassed £7 million:

The broader geopolitics is that the world is going crazy. Maybe it’s time to think that WikiLeaks is not the main problem here for the West, maybe me and my publishing house are a lesser threat than say the Islamic State in Iraq or, closer to home, pedophiles in Westminster. Why are they burning £240,000 a month on me which could be better spent on hospital beds, meals for the needy or teachers’ salaries? The Metropolitan Police Service has now spent in excess of £7 million on guarding the embassy, which is a ridiculous waste of taxpayers’ money.

What are your thoughts on this matter? Do you think Julian Assange should be allowed to have treatment inside a hospital? Share your comments with us in the section below.