John F. Akers, 79, passed away this Saturday. Edward Barbini, a spokesman of IBM said that he died of a stroke. Mister Akers was born on December 28, 1934 in Boston. He received his business degree from Yale (he was an all-Ivy League Hockey player) and became chief executive and chairman of the IBM company during a turbulent time. He took the helm back in 1985, when the rise of personal computers led to the decline of the mainframe computer business. 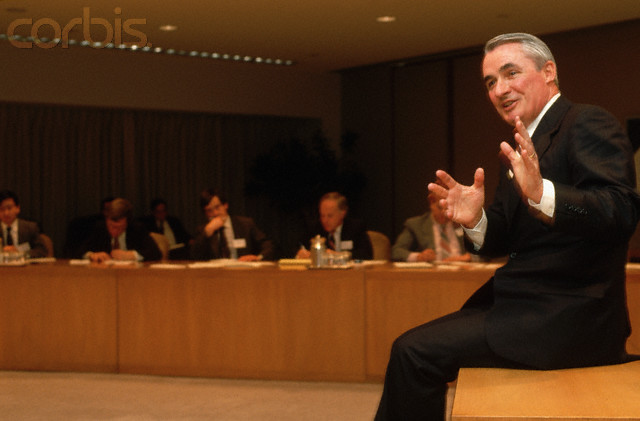 Mr. Akers, a former Navy pilot, fit perfectly with the company and quickly became an expert in IBM’s clean-cut culture. He began his career as a sales trainee in San Francisco but quickly rose to the position of chief executive in 1985. The following year he also became chairman. During that time IBM was really struggling, mainly because smaller, more powerful machines that were also using less expensive technology became more popular than the mainframe computers of the company.

Mr. John Akers decided that the company must change course in order to increase sales. Therefore, he pursued a reorganization which would ultimately divide the company into several independent businesses (some of which were competing with the others).

“John Akers clearly understood that the future of IBM was much more in software and services than in hardware and that the current company had to be pared down,” – David B. Yoffie, Harvard Business School professor

David B. Yoffie sat down several times with Mr. Akers, and used the data collected in his interviews to build a case study. One thing that he appreciated was the fact that Mr. Akers held on to the company’s mind-set during the ’70s and ’80s. In other words, he tried to build a business where employees could expect stable, lifetime employment. Instead of firing people he would trim their payroll or offer older employees incentives to retire.

“His background and mentality made it impossible for him to do what his successor, Lou Gerstner, an outsider, did 18 months later (…) He was going way too slowly.” – Mr. David Yoffie

In 1993, when IBM reported the largest yearly loss, Akers was pressured to stand down. He left the company somewhere around May that year.

Mr. Akers has had an impressive career. For example, he served on the boards of many huge corporations like Hallmark, PepsiCo and W.R. Grace & Company. Also, his tenure on the New York Times Company board of directors lasted between 1985 and 2006, making him one of the longest-serving members.

His survivors include his wife, Susan Davis Akers, and three children (a son and two daughters). In an interview from 2010, Mr. Akers described the company that he worked for 33 years as “very square”.

“We wore the blue suits, white shirts with button-down collars, striped ties, fedoras and wingtip shoes (…) The customers felt they could count on us.” – Mr. Akers in an interview