On Sunday, an Iranian passenger jet crashed after taking off from the airport near Teheran, the capital city of Iran.

There were 48 people on board who were killed during the crash according to state media.

Iran-140 are aircrafts that are typically used for domestic flights. The aircraft was scheduled to fly from Teheran to Tabas and wsa operated by Sepahan Air. The crash took place near Merhabad airport, located west of Teheran. IRNA, Iran’s news agency, reported that the plane had gone down in a residential area. Apparently, what caused the crash was an engine malfunction, said IRNA. 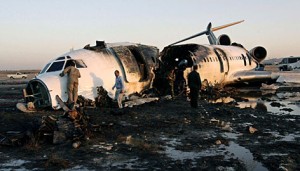 According to Iranian Television, 48 people were killed (the total of people on board, out of which 40 were passengers and 8 were crew members). The plane crashed shortly after it took off at 9:20 AM (local time).

Iran-140 aircrafts are 52 seat passenger planes that are produced with Ukrainian technology in Iran. This is another crash in a series of other crashes that are blamed on alleged poor maintenance and aging aircrafts. For instance, many Boeing aircrafts that belong to Iran Air’s fleet have been purchased before the Islamic Revolution that took place in 1979.

Moreover, Iranian airlines have always been scraping by and consequently, aircraft maintenance has suffered.

U.S. sanctions have been preventing Iran from updating their American aircrafts and have made it difficult for them to find European spare parts. Consequently, Iran now relies on Russian aircrafts (many of which are Soviet-era planes).

In January 2011, the last major airliner crashed in Iran. At that time, an Iran Air Boeing 727 was broken into pieces upon impact when it attempted an emergency landing while caught in a snowstorm in northwestern Iran. During that crash, 77 people were killed.

Before that crash, another jetliner, this time Russian-made, also crashed in 2009 in northwest Iran after it had taken off from Teheran, the capital city, in 2009. During that crash, all 168 passengers that had been on board were killed.

Another Russian-Made Illyushin 76 that was carrying member of the Revolutionary Guard crashed in February 2003 in southeastern Iran. That crash also brought with it the largest number of casualties, as 302 passengers were killed.

Iran now faces great difficulty in ensuring their passengers that flights and maintenance procedures are up to date with proper procedures and requirements and that they can offer complete safety to all who board their aircrafts in the future.