You are here: Home / Sports / Hunter Mahan Wins at The Barclays 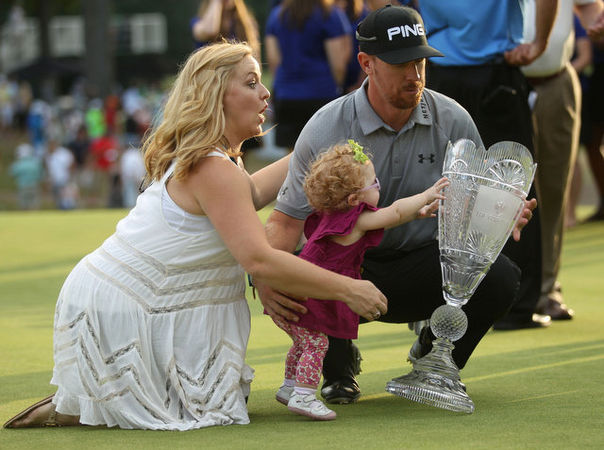 Hunter Mahan won the 6th title of his career at The Barclays, shooting a 65 in his final round, launching him into first place in the FedEx Cup playoffs. He already has two World Golf Championships, but this one was Mahan’s first victory since the 2012 Shell Houston Open, a span of 62 events.

He had gone nearly 30 months and 48 tournaments worldwide without winning, but this plunged him from his No. 62 spot, at 25th in Team USA’s Ryder Cup standings, to a strong contender for one of Tom Watson’s three captain’s picks for the Ryder Cup Sept. 26-28 in Scotland.

In a congestion of rivals Sunday at The Barclays, Mahan pulled away with five birdies in a seven-hole stretch on the back nine at Ridgewood, including three in a row late in the final round that sealed the win.

“To get a win in an event like this, and the timing that it was, it feels unbelievable,” Mahan said.

He won by two shots over Jason Day, who couldn’t manage anything but pars over the last four holes and shot 68; Stuart Appleby, who had to scramble for par on the last two holes for a 65; and Cameron Tringale, who made bogey from the trees on the final hole for a 66.

“I haven’t done my best this year but to get the win and the timing of this is incredible,” said Mahan, who was a captain’s pick in 2008 and automatically qualified for the 2010 team. “I’ve felt great the last few weeks and I felt my game was coming around. I felt my game was in good order.”

In spite of his glorious victory, the only thing that reportedly went wrong for Mahan Sunday night was the fact that his trophy broke. All he had to show for undoubtedly the biggest win of his career was a large wreath of roses. “Am I supposed to put this on, Kentucky Derby style?” he said.

The leaderboard at Ridgewood Country Club in Paramus, N.J. was as follows: Hunter Mahan at -14, Jason Day, Stuart Appleby and Cameron Tringale at -12; Matt Kuchar, Ernie Els and William McGirt at -11.

“The year has been a bit quiet so it was really nice to get out there today and feel more comfortable,” Appleby said. “The nerves, I dealt with them nice, which was great. It was a great test of golf and it was just nice to roll the ball and make some putts.”