Hawaii knows the drill when it comes to preparing for tropical storms but it seems that lately, that’s the only thing they’re doing, preparing without actually getting hit by any of them, fortunately.

The people of Hawaii are stocking up on water, food, toilet paper and other essential items and wait to be hit by the tropical storms that are common during this time of year. There isn’t any way one could determine how much damage these storms will actually produce, but most Hawaiians aren’t taking any chances, especially now when Hurricane Iselle is expected to hit later this week and Tropical Storm Julio a few days after Iselle.

The stores are selling big and have already started to re-stock with water bottles and canned meat as the avid shoppers are making their ways through the supermarkets. Powerful storms are quite common in the waters around Hawaii, with at least one hitting every year during the storm season. 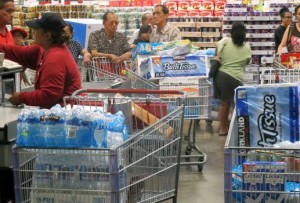 The news that these two storms are heading towards the Islands has made people more worried than usual. Hurricane Iselle will reach the archipelago by Thursday and Tropical Storm Julio will hit the Islands three days later.

Meteorologist for the National Weather Service in Honolulu, Eric Lau had this to say about the two storms:

Hawaii is a small target in the big ocean, so it just has to be really good timing and the conditions have to be right for us to get a direct hit.

Although there is much preparing going on for such powerful storms, Hawaii has only been hit by hurricanes three times in the last 60 years and 147 times by tropical cyclones. Hawaii’s last hurricane was in 1992 when 6 people died and Hurricane Iniki destroyed more than 1,400 homes.

We’ve been lucky so far. So we just need to really take this threat seriously and make sure everybody is prepared.

Assistant general manager of Costco, Scott Ankrom said that the only way the store can prepare for the wave of clients is to open the door and hold on for the ride.

When Hurricane Iselle hits the Big Island on Thursday, it is expected that the hurricane would have weakened to a tropical storm, spokesperson for State Civil Defense, Brian Miyamoto declared. Tropical storms are still quite dangerous, as they can bring winds of up to 50 mph.

What are your thoughts on this news? Have you ever experienced a hurricane in your area? Share your comments with us in the section below. We love hearing from our readers.