A clinical trial is set to commence soon of an experimental vaccine against the Ebola virus. The British drug maker company, GlaxoSmithKline (GSK) is developing the product alongside scientists from the United States.

The current Ebola outbreak is the worst in recorded history. It killed almost 1,000 people in West Africa and it’s not giving any signs of slowing down. Two Americans have been infected and they are now treated on U.S. territory, in a hospital in Atlanta. They are both feeling better and they are going to pull through.

The situation in West Africa is quite grim and this has prompted researchers to accelerate their work on a vaccine for the disease. At this moment Ebola has no treatment, cure or vaccine. Many are saying that the drug companies from the U.S. and Europe haven’t tried to make any vaccines against the disease because, until now, Ebola was no quite contained and did no significant damage. 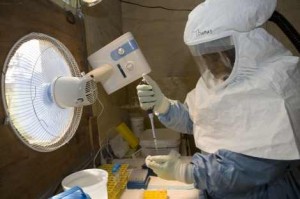 Recently, WHO has declared Ebola an international health emergency and GSK is taking notice. This experimental vaccine that GSK will start testing has already given some promising results on primates and will enter Phase 1 testing once it is approved by the U.S. Food and Drug Administration. Phase 1 testing refers to testing on human subjects.

A spokesperson for the company declared yesterday that the trial should begin later this year, but the NAID (the U.S. National Institute of Allergy and Infectious Diseases) declared that the trials could start as early as fall 2014 (even September).

Even with all the rush behind the human testing, the new vaccine could not be ready for sale before 2015, assuming it works as well as it was hoped it would.

It is right at the beginning of the development journey and still has a very long way to go.

This vaccine is based on a chimpanzee adenovirus that has been given two Ebola genes. As almost all vaccines, it contains no infectious virus material. If the adenovirus sounds familiar is because it is the one that causes the common cold.

Once the vaccine enters the body and its cells, it delivers its genetic load and the Ebola virus genes produce a protein that makes the body generate an immune response. The adenovirus doesn’t replicate, so everything is extremely safe.

The vaccine should work, in theory. GSK didn’t work on this vaccine alone. It actually acquired it after buying the Okairos biotech company for $335 last year.

Johnson & Johnson is also working on another Ebola vaccine that is aimed at being administered during the early stages of the disease. It is called Crucell and it should enter human trial testing in late 2015 or early 2016.