You are here: Home / National News / Fourth Night of Racial Demonstrations is Full of Violence 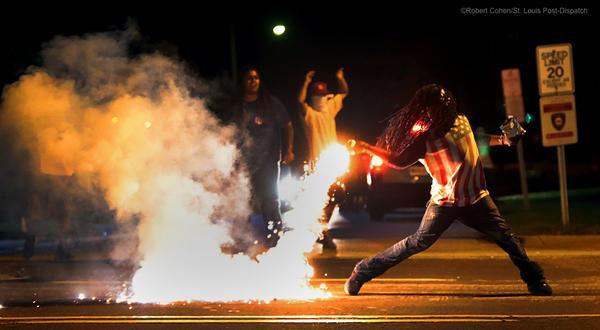 In order to disperse about 350 protesters, the police in Ferguson, Missouri, had to fire tear gas, stun grenades and smoke bombs Wednesday night. This fourth night of racial demonstrations was full of violence, after the police had shot to death, Michael Brown, a black teen.

Brown was reportedly unarmed when he was shot multiple times by police. Witnesses claim Brown had his hands up and was trying to surrender to police when he was shot. The Police on the other hand claim they were assaulted while trying to arrest him, claiming that Brown allegedly assaulted the officer and the two struggled over his gun inside the officer’s police car.

Ferguson Police Chief Thomas Jackson said the department wouldn’t release the name of the officer involved in the shooting because of fears regarding his safety.

During a Wednesday afternoon press conference, police insisted for the protests to take place during daylight hours. But as night fell, the streets remained lined with both protesters and police in military vehicles.

The Wednesday demonstration turned into a violent one as night fell and at least 10 people were arrested over the course of the night. A policeman was injured by a brick thrown by protesters, who also threw Molotov cocktails.

The Huffington Post’s Ryan J. Reilly and the Washington Post’s Wesley Lowery were also arrested Wednesday evening while covering the protests. SWAT officers arrested the reporters inside a McDonald’s. “The officer in question, who I repeatedly later asked for his name, grabbed my things and shoved them into my bag,” said Reilly. “He used his finger to put a pressure point on my neck.”

Both journalists were eventually released unharmed.

Some of the protesters Wednesday raised their arms above their heads as they faced the police, while others held signs asking for answers about Brown’s death. The most popular chant was: “Hands up! Don’t shoot!”

The city is about two-thirds black, so there is a history of tension between the African-American community in the St. Louis suburb and the mostly white police department.

“I know the events of the past few days have prompted strong passions,” President Barack Obama said in a statement. “We should comfort each other and talk with one another in a way that heals, not in a way that wounds.” He also asked people to recall Michael Brown “through reflection and understanding.”