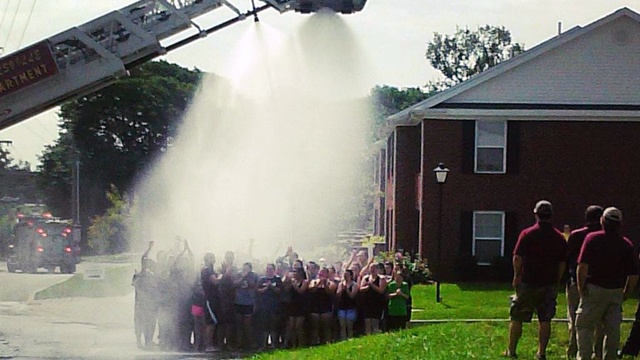 The charity stunt that has grown into a social media phenomenon known as the “ice bucket challenge” went terribly wrong for four Kentucky firefighters, when a fire truck’s ladder got too close to a power line after they dumped water on college students who were taking part in this social phenomenon.

Eric Johnson, a spokesman for Supporting Heroes, an organization that provides support to family members after emergency responders are injured or killed in the line of duty, said two of the injured firefighters are being treated at and will be released from a Campbellsville hospital today. The other two firefighters on the other hand were transported to University of Louisville Hospital. One of them is in critical condition. The other is in fair condition, Johnson explained.

The firefighters had just finished dousing cold water on the Campbellsville University marching band when they were shocked by electricity.

Fire Capt. Tony Grider, 41, and Simon A. Quinn, 22, were both in the fire truck bucket when they were shocked. It happened while the bucket was being lowered. On the other hand, no students were injured.

Grider, a 16-year veteran of the department, was in critical condition at the University of Louisville Medical Center Burn Unit. Quinn, a part-time firefighter, was in stable condition at the same hospital.

Also injured were Capt. Steve Marrs, 37, who has been with the department for 11 years, and Alex Johnson, 28, who has been there three years.

“We express heartfelt sympathy and prayers for the families of the firefighters who were injured,” University President Michael V. Carter said in a statement.

The challenge was popularized in the United States on June 30, 2014, when personalities of the program Morning Drive, which airs weekdays on Golf Channel, televised the social-media phenomenon, and performed a live, on-air Ice Bucket Challenge. Soon after, the challenge was brought to mainstream audiences when television anchor Matt Lauer did the Ice Bucket Challenge on July 15, 2014 on NBC’s The Today Show at Greg Norman’s request.

The ALS Association said it has raised more than $41 million.