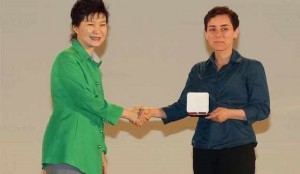 The first female winner of the Fields Medal is an Iranian mathematician: Prof. Maryam Mirzakhani. She is currently working inside the U.S. and she received the medal for her outstanding work on complex geometry.

The International Congress of Mathematicians is held in Seoul every four years and it gives away four medals. Among this year’s winners are Prof Martin Hairer (University of Warwick, UK) whose work on randomness can improve climate modeling. The other two medals were awarded to Dr. Artur Avila (a Brazilian mathematician who earned his PhD at the age of 21 in dynamical systems) and Prof Manjul Bhargava, a number theorist at Princeton University.

The Fields Medal is awarded by a committee from the International Mathematical Union and some say it is the Nobel Prize for math. Aside from the medal, the winners also get a 15,000 Canadian dollars cash prize.

The Fields Medal was first awarder in 1936 and ever since 1950 it was awarded every four years. To be eligible for the medal, one must be no older than 40 years of age, as the it wants its winner to strive for further achievement, aside from recognizing the person’s success.

Prof Mirzakhani teaches at Stanford University in California and by winning this year’s medal, she has become the first female medalist, something that has been eagerly awaited in the math community.

A member of the medal selection committee from the University of Oxford, Prof Dame Frances Kirwas has states that although the field has been viewed as a male preserve, women have always been great contributors to mathematics. She added:

I hope that this award will inspire lots more girls and young women, in this country and around the world, to believe in their own abilities and aim to be the Fields Medallists of the future.

This is an enormous feat that must be acknowledged as such. Prof Alison Etheridge, a lecturer at the University of Oxford, had this to say about the Mirzakhani’s win:

Women are doing so well now in mathematics that this is just icing on the cake. It’s the sort of thing which will really catch the public’s imagination – and as a result I think it could have quite an impact on a new generation.