You are here: Home / National News / Firing-Range Instructor Killed by 9-Year-Old Girl with an Uzi 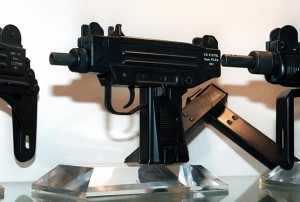 You know things aren’t going to end well when you teach a 9-year-old child to shoot an Uzi automatic handgun. A firing-range instructor was shot to death with an Uzi by a 9-year-old girl whom he was teaching how to operate the powerful automatic gun, after the child lot control of the firearm.

There is even a video of the man teaching the child how to fire the gun. It does not show the man being killed, but it does show a slim girl with a ponytail and pink shorts sitting near a man wearing camouflage pants and a black t-shirt. The video cuts off when after a quick spray of bullets makes the young girl scream.

The name of the 9-year-old girl was not released to the public, but apparently she went at the firing-range with her parents, as they were vacationing in the Las Vegas area. The young girl had fired the weapon several times in single-shot more and she managed to keep it under control, but when the gun was set to fully automatic, it recoiled and the 9-year-old girl lost control of the gun.

The guy was instructor Charles Vacca, a 39-year-old man from Lake Havasy City. He was airlifted to a hospital in Las Vegas after suffering at least one gunshot wound to the head. The man died on Monday night. The sheriff said that there would be no citations issues and no charges filed against the shooting range, because the operation is legal and licensed.

The web site of the shooting range says that the minimum age for being allowed to shoot a gun is 8 and all people with ages between 8 and 17 must be accompanied by a parent or a legal guardian at all times.

A Phoenix-based firearms safety expert, Ronald Scott, declared that most shooting ranges have an age limit and very strict rules for when children are being taught how to shoot. He also added that when children are firing, an instructor always has their hands on the gun.

You can’t give a 9-year-old an Uzi and expect her to control it. Scott said.

A similar incident happened in 2008 when Christopher Bizilj, an 8-year-old boy, shot himself to death with an Uzi at a gun show. The boy was given the Uzi as a Christmas gift by his father.

We are really curious to know what your thoughts are on this subject. Drop us a line in the comment section below.