Violence erupted on the streets of Ferguson, Missouri, after the tragic death of an African-American teenager (Mr. Brown was shot by Darren Wilson, a Ferguson officer). Police officers decided to impose a curfew (which takes effect at 0100 ET) in order to quell the series of aggressive demonstrations and street violence. Governor Jay Nixon of Missouri was the one to impose the new curfew on Saturday. He thought that this is the best way to calm the spirits, but Ferguson residents were not so eager to comply.

Seven protesters have already been apprehended for breaking the curfew. The last confrontation took place on the streets of the St. Louis suburb, because protesters refused to return to their home. 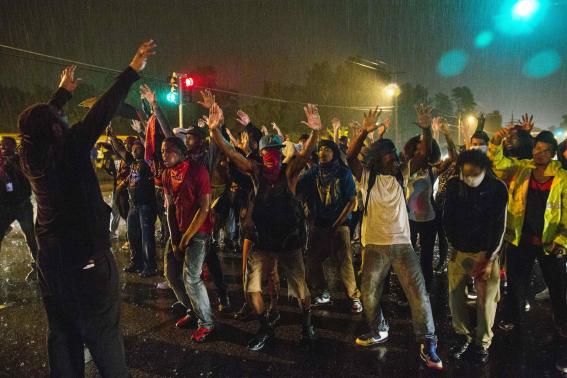 During the chaos a civilian was shot and critically wounded. Although the reason for the shooting is not clear, it seems that the shooter is still at large. At the moment, the Ferguson police department is being heavily criticized for the death of Mr. Brown as well as the handling of the shooting’s aftermath. U.S. Attorney General Eric Holder has also ordered that a medical examiner perform an autopsy on the African-American teenager. He justified the request for a federal autopsy:

The Brown family has not come to terms with Michael’s untimely death. For this reason they are also planning on requesting a pathologist who will conduct an independent examination of the body.

Tension has been building up on the street partly because of a video released by the police department on Friday. In the short clip you can see a robbery at the local convenience store. With it, local police is trying to prove the teenager’s alleged participation to the robbery. The police also said that the officer who killed Brown did not know that he was a suspect for the convenience store heist.

“I think it (the video) had an incendiary effect (…) police clearly are attempting to besmirch a victim of shooting.” – Gov. Nixon

When protesters chose to ignore the curfew, law enforcement officials used loudspeakers hoping that they would disperse. Officers were also equipped with full-length shields, armored vehicles and gas masks.

Highway patrol Captain Ron Johnson stated that the person shot during the night could not be identified, and that the police is not responsible for this shooting. As a matter of fact, smoke and teargas was fired to help officer reach the victim in time (the unidentified victim was taken to the hospital by bystanders).

According to reports, teargas and smoke was enough to disperse the crowd which continued to chant “No justice, no curfew, no peace”. Nixon is pleased with the curfew and believes it was a success.

He does not know how much longer the curfew will last, but he is confident that it will help people speak up for themselves while also protecting private property.

“I say to the young people, I understand your anger and you have a right to be angry, but don’t go mad and burn up your own community.” Gov. Nixon