It’s been three weeks since the Mike Brown Shooting, and Ferguson is finally beginning to heal. Businesses that were looted are open once more, and the smell of barbecue, once again, fills the air. Even the St. Louis-area suburb, which was the main conflict area and the center of international attention, is beginning to heal. Nevertheless, the community still has a long way to go. 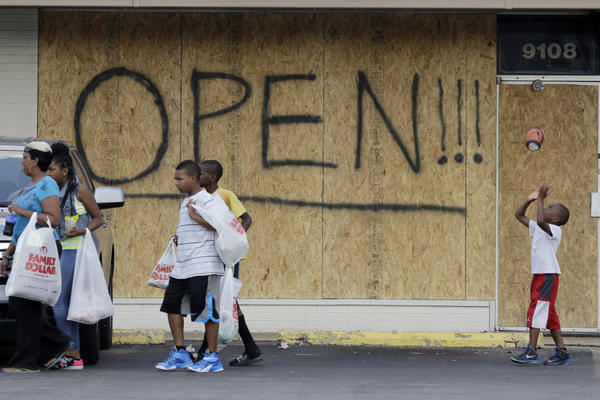 During the street conflicts several local businesses were looted. Although the shops have opened again, some merchants say that business isn’t even close to full recovery. Right now, businesses in the West Florissant Avenue, which were victimized after the shooting of the unarmed African-American teenager, are putting up “Open for Business” signs.

Also, parents who were once too afraid to take their kids out of the home are returning to their old habits once again, and a very popular barbecue joint which was torn apart during the conflicts is now fully repaired. The community is even hanging up “I Love Ferguson signs” on their homes.

“That is definitely symbolic of marching down the road toward solutions and a better tomorrow.”

Missouri State Highway Patrol Captain Ron Johnson stated that he saw several tidy ranch-style homes with “I Love Ferguson” signs on them as he was passing by.

“A few days ago those signs would have been ripped up or thrown in a trash can or painted on. And they stand today.”

Until one month ago, Ferguson would have passed unnoticed. The St. Louis community of 21.000 has somehow managed to raise serious concerns about the interaction between white police officers and the black community. When police officers answered to street protests with tear gas and military-style vehicles, the community looted and continued rioting even more fiercely.

The situation drew so much criticism in the first days that Missouri Gov. Jay Nixon had to step in. He appointed Johnson and the highway patrol to ensure security. Johnson is an African-American office who has lived just outside down for almost all his life.

One of the residents told him that the death of 18-year-old Michael Brown broke him. Another man told him that he might not even reopen his business, despite the fact that he had been there for nearly two decades.

“But I went by the store the other day and I saw him fixing it up (…) There’s nothing greater than the will to withstand.” – Johnson

On Saturday morning, Johnson posed for selfies with people who attended a rally for Brown. This rally began at West Florissant Avenue (near Canfield Drive), where Brown was shot by Officer Darren Wilson.

“We know that his life is not going to be in vain.” Rev. Spencer Booker, from St. Paul AME church in St Louis

“Ferguson is strong (…) it will go back to normal. We’re still going to be here after America’s moved on to something else. We’re strong and we’re going to only get stronger.” – Charles Davis