As we speak, there is no cure or vaccine for the Ebola virus disease, but the experimental Ebola drug which was given to the two Americans treated at a hospital in Atlanta, U.S. has been sent to treat doctors in two West African countries. The manufacturer of the drug has said in a statement that the medicine is now exhausted. 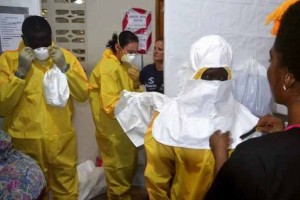 The drug that was sent in the two West African countried is called ZMapp and it is manufactured by Mapp Biopharmaceutical Inc. (San Diego). The drug was provided at no cost, Mapp revealed yesterday:

It is our understanding that all patients offered treatment, treated, or expected to be treated were or are highly capable of providing informed consent for the use of an experimental drug not yet evaluated for safety in animals or people.

The company didn’t reveal which countries received the experimental drug. Mapp, alongside Defyrus Inc., is working with the government of the U.S. to increase production:

Additional resources are being brought to bear on scaling up. The emergency use of an experimental medicine is a highly unusual situation.

Director of the U.S. National Institute of Allergy and Infectious Diseases reacted to Mapp’s actions and said that a small amount of drugs will not help control the outbreak and that the focus needs to be put back on basic public health and infection control measures.

How can a couple of doses control an outbreak with hundreds and hundreds of people? You don’t control the epidemic with two or three doses, Fauci declared.

This is the worst Ebola outbreak in recorded history. As of August 9, it has infected 1,848 people and killed 1,013. Malaria killed more than half a million people last year, but it is completely preventable and curable, whereas Ebola it is not. If the virus spreads to America and Europe, the world could face the most horrible pandemic in history.

What are your thoughts on this news? Do you think it is fair American doctors are receiving the experimental drugs? Speak up your mind in the comment section below, we would love to hear from you on this matter.