You are here: Home / Health / Crucial Days for the U.S. Ebola Virus Patient in Atlanta

The two Americans we infected with the Ebola virus are still not out of the woods. Nancy Writebol will arrive in America to be treated here and Kent Brantly, a doctor, was flown from Liberia to a hospital in Atlanta for treatment.

The American man who is now one of three U.S. Ebola virus patients is being treated and monitored in Atlanta, after being flown in from Liberia on Sunday. The doctors are working hard to make sure that he will receive the best treatment in these coming days, which are, as the doctors put it crucial.

Doctor Brantly’s recovery from the highly deadly disease is still not easy, but then again, it was not expected to be. At first, many believed that he was out of the woods, as footage from his arrival outside the hospital in Atlanta showed him walking on his own feet inside the hospital with little help. He was covered in a protective suit as he made his way inside the isolation unit at Emory University Hospital.

Kent Brantly was lucky to be an American citizen, as he was flown in a chartered air ambulance to the United State just a week after he started developing the symptoms of the Ebola virus. Nancy Writebol is going to be receiving the same treatment soon, as it was confirmed that another air-charter company was hired for this job. 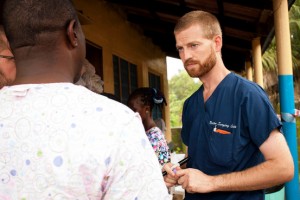 Director of the Centers for Disease Control and Prevention, Tom Frieden, has told Fox News that the doctor seems to be improving, and that’s encouraging.

One of the charities that are operating the center and the group that brought Kent Brantly to Liberia is called Samaritan’s Purse and they’ve also released a press statement in which they said the doctor’s condition was improving. Brantly’s wife said that he was in good spirits when she visited him.

The Emory hospital would not comment on the treatments they are using for Kent Brantly. Right now there are several vaccines and treatment that are in development, but none of them have been approved. The reason why nothing is available for Ebola is the fact that the virus is very rare and that there hasn’t been enough financial incentive for companies to make vaccines.