You are here: Home / Health / African Demand for Ebola Drug Grows While Liberia Lifts its Quarantine

The African demand for Ebola drug is growing. The newly tested drug has managed to completely heal monkeys in lab test. On Saturday, crowds of people celebrated in the street after the authorities reopened a pharmacy that was barricaded for roughly a week to contain the spread of the infection. 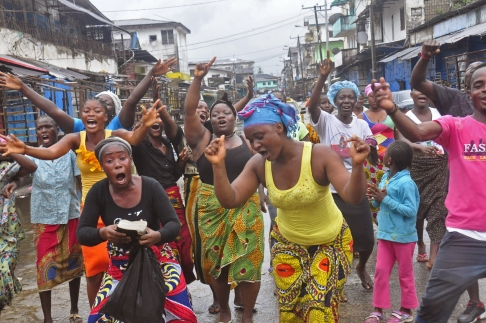 Kindy Kobbah was expected to be released from the hospital after she survived the infection with Ebola. Until now, Ebola has claimed the lives of more than half the cases diagnosed in West Africa. Physician’ assistant Kobbah contracted the disease while she was helping out a government-run hospital just north of the capital. She urged ZMapp, the US-based Mapp Biopharmaceutical to increase production for its drug and send more to Africa.

“They need to make more Zmapp and send it to us.” – Kindy Kobbah

Doctors aren’t as optimistic. They are still unsure how much the ZMapp drug helped with Kobbah’s recovery, because approximately 45% of infected people have also bounced back on their own. The drug had not been tested on humans before it was administered to two infected Americans in Liberia. Nevertheless, a study released on Friday shows that ZMapp successfully healed 18 monkeys infected with the Ebola virus. ZMapp, which is grown from tobacco plants, consists of three antibodies which attach to the Ebola infected cells and help the immune system kill them.

“The level of improvement was utterly beyond my honest expectation.” – study leader, Gary Kobinger from the Public Health Agency of Canada

“For animal data it is extremely impressive.” – Dr. Anthony Fauci, director of the National Institute of Allergy and Infectious Diseases

In the meanwhile, the Liberian government has lifted its quarantine in the Monrovia neighborhood. The government decided to remove the barricades imposed around the seaside district of West Point. Residents of the area received the news with great joy. Celebrations were held in the streets, and shopkeepers reopened their stores.

Ten days ago, when the restriction was imposed, there were several clashes between the riot police and residents (mainly because the residents feared they would be cut off from water and food supplies). Ellen Johnson-Sirlead, Liberian president, demanded the West Point quarantine after an Ebola health care center was stormed by residents.

Also, Guinea imposed a curfew in its N’Zerekore city (the second largest city in the country) after residents ransacked a market. Roughly 12 people were wounded during that clash. According to investigators, residents were confused by health care workers who were trying to disinfect the market.

The World Health Organization says that more than 1500 people have lost their lives to Ebola in Guinea, Sierra Leone, Nigeria, Liberia and Senegal. They also believe that the outbreak is escalating (because 40% of cases have occurred in the past three weeks).