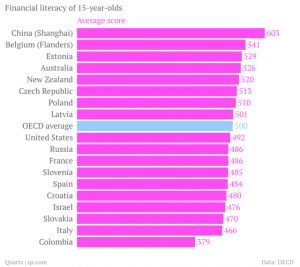 The Organisation for Economic Co-operation and Development (OECD), whose mission is to promote policies that will improve the economic and social wellbeing of people around the word, had the challenging initiative to measure the educational achievement regarding financial basic knowledge of 15-year olds from all over the world. This idea is definitely a worldwide premiere. Moreover the OECD mission presented on their site also states the following: “We work with governments to understand what drives economic, social and environmental change. We measure productivity and global flows of trade and investment. We analyze and compare data to predict future trends. We set international standards on a wide range of things, from agriculture and tax to the safety of chemicals.”

The United States’ youngsters belong to the middle of the chart as far as financial apprehension is concerned, with 18% of them not meeting the baseline level skills as far as financial literacy is concerned. About 10% of Americans ranked really high scores, in other words being perfectly capable not only of arriving at a responsible financial decision, but of identifying more complicate issues like transaction costs as well.

Shanghai-China had the highest average score in financial literacy, with 43% of the students being top performers, followed by the Flemish Community of Belgium, Estonia, Australia, New Zealand, the Czech Republic, Poland, Latvia, the U.S. and Russia.

The OECD quizzed about 30,000 teenagers in 18 countries about several general financial concepts. According to the OECD site, “around one in seven students in the 13 OECD countries and economies that took part in the first OECD PISA international assessment of financial literacy are unable to make even simple decisions about everyday spending, and only one in ten can solve complex financial tasks.”

Michael Davidson, who directed the OECD survey, explained the fact that external experiences, such as youngsters having access to bank accounts, or cultural factors that trigger students to want to solve complicated problems may also play a definite role: “You really need to have deep thinking skills,” Davidson said. “This goes well beyond reproducing knowledge.”

Previous OECD surveys, such as maths or reading, underlined some gender gaps as far as final results were concerned. Italy was an exeption. It also had one of the lowest rankings, followed by Colombia. As far as the U.S. is concerned, math and reading scores have consistently landed below the international average in previous OECD appreciations. China on the other hand, always performed very well.