You are here: Home / Tech & Science / What Does Space Feel Like for Astronauts? 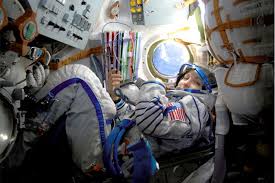 NASA has begun a new training program with four astronauts who have been thrown into what is called a habitation module. This habitation module is, in fact, a tin can sitting underwater, on the seafloor, off the Florida Keys , in which the four lucky astronauts will be spending nine days together.

According to NASA, during this time, they will be testing several pieces of new equipment as well as new procedures. Experts have another opinion, however. It seems that this training method is also efficient in figuring out how people perform and cooperate when in stressful situations.

This habitation module belongs to the NEEMO project (NASA Extreme Environment Missions Operation) which belongs to several different “space analogs” (or simply put, training facilities meant to imitate conditions in outer space as closely as possible here on Earth). Besides this habitation module on the seafloor, there are other installations such as the one in Antarctica, on Devon Island, in Mauna Kea, Hawaii as well as in the Arizona desert.

John Rummel says that such trial runs are excellent since they offer NASA experts the opportunity of discovering what could potentially go wrong instead of having to fix something that has happened for the first time when their astronauts are on the surface of the Moon or on Mars.

While some similarities exist, being 69 feet underwater is clearly not the same as being in space. First of all because there are no fish swimming around on the moon. But also because the astronauts (or more correctly, “aquanots”) receive assistance suiting up and accomplishing certain tasks outside the module. Divers are also always around to provide help. Buoyancy is very different and offers a different feeling as that of floating in space. The water also provides resistance.

Akihiko Hoshide, the commander of the four-man team (and JAXA space agency astronaut) spoke directly to Discovery News from the habitation module and said that the schedule is pretty tight. The astronauts are working efficiently together but they already found some malfunctions they had to deal with. He added that in this respect, the habitation module closely resembles spaceflights.

What may be the biggest space analog apart from the conditions in which the astronauts find themselves is the crew itself, as astronauts learn to cooperate and live together in conditions similar to those of being in outer space. And as their commander, Hoshide has already spent four months on the International Space station back in 2012, he is clearly going to provide valuable experience to these following nine days.