You are here: Home / Business / U.S. Economy Bouncing Back in the Second Quarter 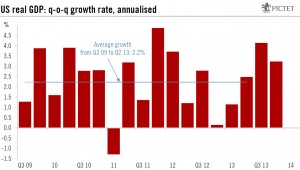 Although the housing sector hasn’t been experiencing the expected growths in prices, global U.S. economic growth is still accelerating at an accelerated rate. The second quarter has brought a decline in output over the last period that wasn’t as steep as economists had expected it.

The Commerce Department reported on Wednesday that gross domestic product had expanded at a 4% annual rate and that activity has been picking up after its shrinking trend during the first quarter. As a result, the Gross Domestic Product (GDP) has risen above the economy’s potential growth trend and has reached, according to economists, a pace of around 2-2.5 percent.

This growth could also be influenced by the overall increase in jobs that have been added by employers on their payrolls during the last months. July brought with it 218,000 new jobs (as opposed to June’s 281,000 hefty gain). This remarkable employment growth (where job offers have exceeded 200,000 in all of the previous five months) is underpinning all the bullish expectations for the rest of 2014. Although reports show that this increase in job offers combined with a decrease in joblessness claims is contributing largely to the strengthening of the economy, perceptions haven’t changed in this respect.

Economists predict that in spite of the first quarter contraction (that was weather-related), 2014 will experience an economy growth of around 2 percent.

What this new GDP data could now cause is a debate as to whether the Central Bank should consider raising interest rates sooner than they had expected.

Consumer spending has also increased in the second quarter as a result of a swing in business inventories. This growth has accounted for, according to economists, more than two thirds of the economic activity in the U.S. and it has accelerated at a pace of 2.5%. This figure is twice as much as it was during the first quarter (1.2%) as Americans have begun to spend more on services and long-lasting manufactured goods.

Additionally, Americans have also been saving more during the second quarter as saving rates increased by 0.4 percent (from 4.9 to 5.3).

Government spending, investment in home building and business investment have also contributed to this boost we are experiencing in our economy.