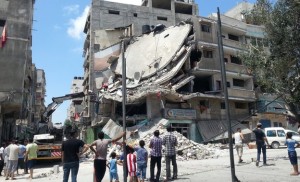 Saturday afternoon continued with violence in southern Gaza as two Hamas terrorists shot at IDF soldiers that in turn returned fire, eventually killing the two Hamas militants. This incident came after a gun battle that took place overnight, during which a Nahal brigade Israeli officer was wounded. Hamas terrorists also attempted to target Israeli forces with explosive devices all the while carrying on the rocket firing that has been going on for the last twelve days.

At one point, they even strapped explosives to the back of a donkey and led it towards Israeli soldiers. While the donkey didn’t actually reach its target and did not injure any Israeli troops (as it exploded at a distance), the situation is clearly escalating quickly and something needs to be done.

Additional incidents took place on Saturday when a Hamas terrorist squad tried to use a smuggling tunnel to get from central Gaza to Israel. IDF was patrolling the area and the militant group encountered the patrol while attempting to arrive in an Israeli community. As the two squads met, a rapid exchange of fire broke out that resulted in the death of one terrorist as well as four wounded IDF soldiers. The rest of the fighters retreated back into Gaza after the incident. The Israeli Air Force went on to find the members of the squad after they fled back into Gaza and consequently thwarted the Hamas attempt to murder Israeli civilians (according to the IDF).

New information has also been made public concerning the man who was killed on Saturday in a Rocket attack. His name has been cleared for publication: Uda Aluj was in his 30s, lived in a village near Dimona and died during the rocket attack in southern Israel on Saturday. Apart from him, a 4 year old girl was also injured during the Dimona attack, as well as three other civilians.

The current death toll has reached frightening numbers after the conflict on Saturday. Currently more than 330 people have died and while the exact number of injured people isn’t known, over 2,200 people have sustained serious wounds according to the Gaza Health Ministry. Out of the total casualties, 80% are believed to be civilians, many of which children that shouldn’t be subjected to such violence. The United Nations have also confirmed that tens of thousands of Palestinians are currently asking for refuge in U.N. Shelters.