You are here: Home / National News / Three-Year-Old Toddler Wakes up During her Own Funeral, After Being Declared Dead 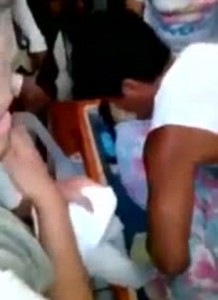 A three-year-old toddler from Zamgoanga del Sur, in Southern Philippines, was declared clinically dead by doctors. She woke up during the preparations for her funeral service. The terrible tragedy was avoided with the help of a relative who removed the lid on the coffin to check if the child’s remains are in place. The mourner soon realized that the youngster’s head moved. The commotion, when her family realized that she is alive, was captured on camera by one of the mourners.

Only seconds later the toddler was lifted from the coffin by her family. She appeared weak but she was definitely alive and breathing. The toddler, who has not been named, had a regular pulse and was breathing properly despite being declared dead by Zamgoanga medics.

According to senior inspector Heidil Teelan, the girl had been suffering from severe fever. She was taken to the hospital on Saturday. The Philippines Star reports that the attending clinic personnel confirmed that the youngster had no pulse Saturday morning, at approximately 9 A.M. Even before making an official declaration medics advised the family to take the child home, and make preparations for a funeral service.

Video: Young Filipino Girl Wakes up During her Own Funeral

“We really cannot make confirmation on the status of the girl but based on the observation of the police personnel I deployed it appeared the girl remained in a state of comatose in their house.”

The family started preparing for the funeral after clinical death was declared. It was during the service that one of the mourners spotted unusual movement. After checking the pulse the family realized that the girl was still alive.

This prompted them to check and confirmed the girl had pulse and was alive.

Her father lifted her out of the coffin, gave her some water and took her to a better equipped hospital. Teelan says that this case is extremely unusual, especially considering that there was no proper authority to confirm the severity of the medical situation. However, based on the accounts of the toddler’s parents she had been experiencing severe fever for several days before being brought to the hospital. 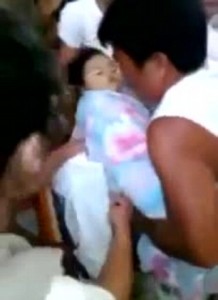 In the end, a miracle happened and the child was not taken away from her family. This is not the first case of people waking at their own funeral, but it is one of the few cases involving children. Family members of Brighton Dama Zanthe, 34, from Zimbabwe, thought that he had come back to haunt them after they noticed him moving in his coffin.

Also, Walter Williams of Lexington, Mississippi woke up in a body bag right before being embalmed. Another case, involving two-year-old Kelvin Santos occured in Belem, North Brazil. He woke up, asked for a glass of water, than laid down again. There are many other cases similar to this one.