Unfolding Mother Earth’s tiniest secrets is a piece of cake. Or not, as the latest scientific discovery reveals an unusually small type of he 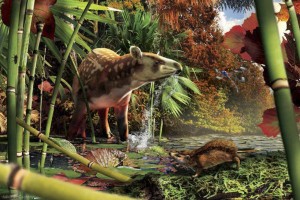 dgehog, measuring about 2 inches (5cm), that lived 52 million years ago. The little creature used to live in a rainforest in northern British Columbia (approximately 420 miles north of today’s Vancouver) during an especially warm time on Earth.

“It is quite tiny and comparable in size to some of today’s shrews”, said the main researcher in the study published on Tuesday in the Journal of Vertebrate Paleontology, University of Colorado paleontologist Jaelyn Eberle. “We were surprised by its tiny size, and frankly it threw me for a while and made it difficult to identify.”

The tiny hedgehog is scientifically called Silvacola acares, meaning “tiny forest dweller”, and apparently it lived approximately 13 million years after an asteroid had wiped out all the dinosaurs. This period is called the early Eocene and it is known to be one of the warmest periods in the history of our planet. It produced a specific community of mammals in North America that can no longer be seen today. In other words this is another surprising detail about Silvacola’s discovery: its location. As Eberle explains, hedgehogs nowadays can only be found in Europe, Africa and Asia.

What about the quills? Well this particularly ancient tiny creature’s fossils are not complete enough to prove that Silvacola really possessed quills just like its modern relatives do. It is more likely to have had bristly hair, just like primitive hedgehogs that lived in Europe at that time. Eberle added that the hedgehog was an omnivore. It most likely ate insects and plants.

Because of its size, its back molars were just 1 millimeter in length. Moreover, its bones were so delicate that there was a real danger that if the researchers tried to move the fossil, it would break apart. Instead, a computed tomography scanner was used to capture 3D X-ray images, thus making it possible for the creature’s tiny teeth to be studied safely.

However Silvacola’s fossils were not the only highlight of the day, as scientists also discovered the remains of a tapir-like animal about as big as a dog – Heptodon. It was an herbivore about half the size of today’s tapirs but lacking the short trunk they usually have nowadays. “The discovery in northern British Columbia of an early cousin to tapirs is intriguing because today’s tapirs live in the tropics,” said Dr. Eberle.

According to David Greenwood of Canada’s Brandon University, another member of the researchers’ team quoted by Reuters, “Driftwood Canyon is a window into a lost world, an evolutionary experiment where palms grew beneath spruce trees and the insects included a mixture of Canadian and Australian species. (…) Discovering mammals allows us to paint a more complete picture of this lost world.”