You are here: Home / Tech & Science / The Largest Flying Dinosaur Unearthed in China 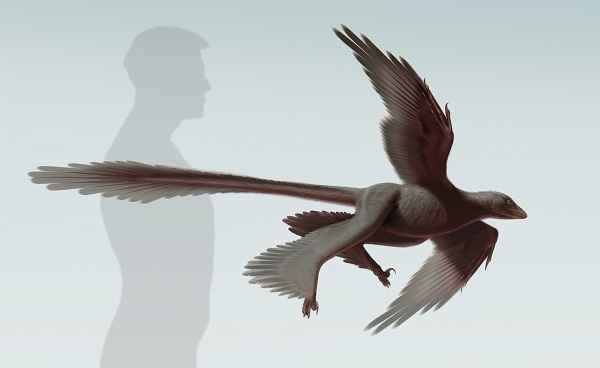 Probably the largest flying dinosaur, the dinosaur Changyuraptor yangi has been unearthed in China. The 125-million-year-old feathered dinosaur. It had feathers over its entire body, including its arms and legs, which made it look as if it had two pairs of wings. Moreover these feathers were unusually long, about one-fourth the length of the entire animal.

The fossil was discovered in 2012, in Liaoning province in northeastern China, where several other “relatives” have also been discovered. According to study author Luis Chiappe, a paleontologist and director of the Dinosaur Institute at the Natural History Museum of Los Angeles County, “the vast majority of feathered dinosaurs in Liaoning are collected by farmers who live there.”

It belongs to the family of dinosaurs known as Microraptors (a group of predatory, feathered, non-avian dinosaurs) and it is definitely the largest one so far, 60% larger than the previous record holder, Microraptor zhaoianus. It was exactly 4-foot-long and it weighed about 9 lbs. The extremely sharp teeth are a clear indication of Changyuraptor’s predator capabilities.

Northeastern China “was a broad peninsula or wedge into the ocean, with volcanoes,” Chiappe said. “It was a moist temperate forest, mostly of conifer trees and gingko bilobas, with dry hot summers and pretty cold winters. There were a variety of meat-eating and plant-eating dinosaurs in the area, including Yutyrannus, a feathered relative of Tyrannosaurus maybe 27 to 30 feet long.”

This forest surrounded a chain of interconnected lakes and other flowing waters, also surrounded by active volcanoes clouds of ash and pyroclastic flows, which directed the remains of these animals into the nearby lakes where they were covered by volcanic ash and sediments.

“To many people the idea of flying dinosaurs is a novel concept, feathered flight has always been assumed to be the domain of birds,” says Chiappe. “There’s now plenty of evidence to show that birds were descended from dinosaurs, and we’re also learning that these dinosaurs were also capable of flight.”

However it’s still not clear whether Changyuraptor actually flew or just glided. Its unusual long back tail may have helped Changyuraptor orient itself and reduce its speed during descents, so it didn’t injure itself when it landed, Chiappe explained. Its prototype closely resembles a plane. In other words this is a clear proof of the fact that dinosaurs are the direct ancestors of today’s birds.

Regarding its name, Changyuraptor yangi, the first part means “long-feather raptor,” while the second one honors a Chinese financial supporter.