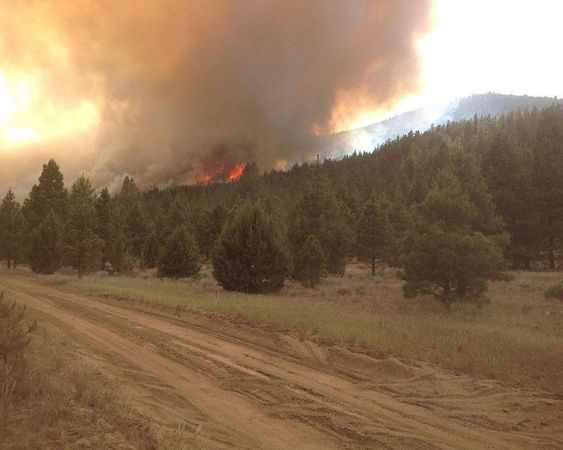 Rapid-growing wildfire has spread in Southern Oregon, destroying homes and forcing more than 100 people to be evacuated from their homes. The fire erupted near Sprague River on Sunday at around 2pm PDT and by 1am on Monday it had traveled around four and a half miles.

Erica Hill, spokesperson for the South Central Oregon Fire Management Partnership (SCOFMP) declared that the firefighting crews would have more details about the damage left behind by the fire, once the scene is assessed in daylight, she told Associated Press.

The SCOFMP said that the fire has destroyed an undetermined number of structures and homes in Klamath Falls and was burning through brush and timer in the city’s Moccasin Hill neighborhood. The Klamath County sheriff’s deputies have managed to evacuate more than 100 people and up until now there is no sign as to any injuries resulting from the fire.

The reason behind fire and spread are the high winds and dry weather conditions. The firefighters are hoping the night humidity will help slow the blaze down.

They’ll be working overnight to get a containment line around the fire.

A shelter was set up by the Red Cross at a community center 25 miles northeast of the city, in Sprague River.

This is not the first time this month that Klamath Falls has had a fire. On July 4 at about 9:30 pm a fire ignited on a private land not far from Klamath Falls. The blaze was visible from U.S. 97 and the drivers were warned about the heavy fire response traffic and also road hazards between the 265 and 267 mileposts. Then, figherfighters managed to contain 70% of the 60-acre fire whose cause is still under investigation, it was revealed by the Oregon Department of Transportation.

Firefighters urge people to respect fire safety rules and to comply with any warnings and recommendations that might be given in case of emergency. In case of fire evacuations, put together an essentials-only bag to have with you, if time permits. Remember that your life is more important than your belongings.

Do you live in Southern Oregon and have seen the wildfire? Has it affected your house or you’ve been evacuated? Do you know someone who has been evacuated? Drop us a line in the comment section below and share your thoughts with us. We would like to hear from you!