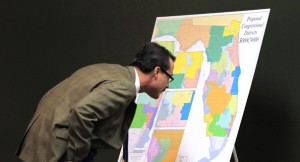 On Thursday evening, Circuit Court judge Terry Lewis ruled that the Republican’s proposal for a redrafting of the state’s congressional map is unconstitutional. Lewis also added some harsh words on the proposal as well, in a ruling that could turn around the Republican’s upper hand in the state’s House delegation. Another implication of the circuit judge’s decision is that the state’s congressional district map might just be redrawn in time for this year’s Congress polls.

Current Florida legislation with regards to congressional districts is based on the so-called Fair Districts amendments. These amendments were passed in 2010 and state that the redistricting process needs to occur every decade. According to the current laws, this process does not take into account the advantages of incumbents or the state’s partisan makeup. Judge Lewis’s decision also included a diatribe against the GOP Legislature in Florida, which worked with several political consultancy experts on redrawing the state’s congressional district map. In the judge’s opinion, the Republican consultants “did in fact conspire to manipulate and influence the redistricting process”. The result, in the judge’s view is “a mockery of the Legislature’s proclaimed transparency and open process of redistricting”. He adds that the Republicans made use of the access this process gave them to the decision makers, but, at the same time, made sure the public remained unaware of their plans and the way they went about them.

The judge’s decision regarding the redrawing of the map was clear enough and he did not mince words in terms of what he thinks of the GOP’s modus operandi. However, he did not expressly state whether or not the state of Florida will see new congressional district lines drawn on its map before this year’s elections. Such a decision requires several other court motions, but the delivery date on these motions is yet unspecified as well. And, by all counts, the Republican GOP will probably appeal the Circuit Court ruling to the Florida Supreme Court, which, in turn, will add some more time to the entire process.

Michael McDonald, a political consultant who has worked on the redrawing of Congressional district maps in several states, as well as an associate professor at George Mason University, says the Florida redrawing might not be ready in time for the 2014 polls. At the moment, with the proposed Florida Congressional map rejected through the judge’s ruling, a remedial map is expected to replace it. This might determine the postponement of the August 26 primaries in Florida, especially since appeals are also to be expected. The two districts found in violation of the Fair Districts amendment are the 5th and 10th Districts in central Florida, whose representatives are Democrat Corinne Brown and Republican Dan Webster respectively.