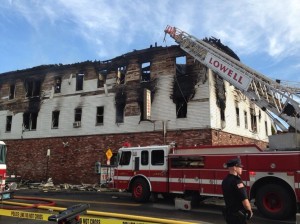 The Lowell suburb of Boston saw an apartment building catch fire on Thursday morning. The fire alarms quickly went off around 3:30 a.m. in a building on Branch Street. Even though the Lowell Fire Department task force was quick to arrive on the scene, several people are still missing, according to statements made by the authorities to local website Boston.com. The Fire Department intervened in rescuing five inhabitants of the building in question from its upper floors; ladder trucks were involved in the rescue and relief efforts.

Reporting from the scene, journalists from local news stations WHDH and WBZ said some of the residents became trapped on the superior floors of the building and eventually had no way out of the fire but to jump off. Some of them even had to drop their children to the ground, in order to have them intercepted by members of the local fire department.

Even in spite of the sustained effort to rescue as many residents of the building which had caught fire, fire department officials say several of the 48 inhabitants have still not been located. They have been declared missing – and the Lowell Fire Department has no official number of missing people in this case, as of the writing of this article. They will continue to thoroughly search the premises, while also confirming which residents were at home and which ones weren’t at the time that the fire broke out. According to Deputy Fire Chief Patrick McCabe, in a statement made to the Boston Globe, the fire relief effort is made all the more difficult because of the damage to the building. Aside from hosting apartments on the upper floors, there were businesses on its ground floor.

McCabe was unable to provide the press with an exact number of people who had been taken to the hospital as a result of injuries or intoxication sustained during the fire. Fire Marshal Stephen Coan told the same source that the authorities will continue to investigate the case of the Lowell fire and added that, “if those unaccounted are in that building, this is a recovery effort at this time”. Updates coming in on Thursday confirmed that at least seven people have died in the fire, all of them in two apartments on the third floor. Their identities, ages, and genders were not immediately released to the press.

The incident was promptly followed by witness reports on social media. The above image was taken and posted by David Robichaud on Twitter, on July 10.