You are here: Home / National News / Octomom Gets Two Year of Probation for Fraud 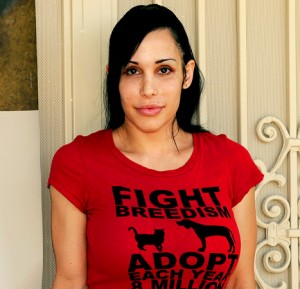 Nadya Suleman, also known in the media as Octomom, has pleaded guilty for welfare fraud in a Los Angeles court. The statement was released to the public by the Los Angeles county district attorney’s office on Monday afternoon.

Nadya Suleman became famous in 2009 when she gave birth to octuplets following fertility treatments. She was advised not to keep all eight embryos, for her safety and the safety of the infants, but she decided to keep them. She already had six more children.

Octomom had been getting money for videos (some of it with an adult content) and personal appearances but in January, 2013, when she applied for welfare, she failed to mention this. The total sum of money Suleman earned between January and June 2013 was $30,000.

Reuters reported that her lawyer claimed that the failure to report the money was due to poor record-keeping. Now, she was sentenced to two years of probation for failing to report income while on public assistance.

An anonymous tip is what lead officials to start the investigations into the Suleman case. It’s no wonder that this happened, when she was in the public eye for so long and even mentioned on camera that she was on welfare.

Octomom has since paid almost $10,000 for Medi-Cal overpayments to the California Department of Health Care Services and almost $17,000 for aid to the Los Angeles County Department of Public Social Services.

Nadya Suleman is one of the two women in the United States that successfully gave birth to octuplets, but, as New York Times observed back in 2009:

Perhaps most saliently, in terms of public opinion, she is the first to have emerged from childbirth ready for the world’s cameras with what looks to most people like plastic surgery — facial modifications, it would seem, designed to approximate the visage of that other notably avid producer and acquirer of children, Angelina Jolie.

Octomom does not have the sympathy of the public and she never had it. Most of the criticism came from the fact that she decided to undergo fertility treatment to have children, when she didn’t have a job to support them. Times magazine had this to say about her situation:

[…] proof of everything that is wrong with American culture, single mothers, California and the welfare state. The controversy over whether she should be ‘punished’ reached such a pitch that as state legislators and bloggers worldwide clamored for public authorities to intervene, Suleman and her representatives received death threats.

What are your thoughts on this news? Did you know about Nadya Suleman? Do you think the punishment is too harsh or too kind? Drop us a line in the comment section below, we would love to hear what you think about this.