You are here: Home / National News / President Obama Asks for $3.7B Spending to Deal with Immigration Crisis 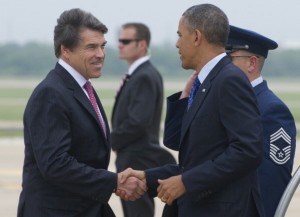 On Tuesday, the acting POTUS appeared before Congress to appeal for $3.7 billion in expenditure, which would go toward solving the country’s immigration problem on the south border. The situation, which appears dire by all accounts, has been described as a human drama. According to reports, thousands of unaccompanied children are showing up on the southern border of the United States. The situation came to Obama’s attention during a visit to Texas. Initially, the purpose of the visit was solely to raise funds for the Democrat Party. After the issue came to Obama’s attention, however, the schedule was amended to include a meeting with Texas Gov. Rick Perry, during which the two officials will discuss immigration. Obama will also meet with local lay and religious leaders, to address the same problem. Gov. Perry reportedly pressed for Obama to go visit the border in person, but the President rejected the invitation.

Obama’s appeal came in the form of an official request letter, in which he asked for money to “address this urgent humanitarian situation”. The response in Congress was relatively positive, from most Democrats, as well as from several Republicans. The Congress members in question considered approving the request and dispatching funds, in order to better manage the immigration issue. Proposed expenses include building extra facilities for detention, increasing surveillance efforts and improving law enforcement along the border between the United States and Mexico.

On the one hand, Harry Reid, D-Nev, the leader of the Senate Majority, said the Senate will follow through on Obama’s request in July. On the other hand, however, certain Democrats expressed their skepticism regarding some of the planned expenses. Senate Democrats, for instance, largely oppose the White House plan of sending minors back to Central America quicker. According to current legislation, these minors have the right to be heard in court. Sending them back home more swiftly would limit their rights in this respect, which advocates of immigrant rights find unacceptable.

Obama’s stance on the immigration issue has also predictably been met with criticism from House Republicans. Many have spoken out critically, against his decision not to address legal changes in his request. When the White House first addressed the situation on the Mexican border, it also promised to enforce some changes in the current laws, but it then changed its mind and said the law would be amended at a later date. The Republicans are now saying that the POTUS is vacillating because he was met with opposition from his own political base – and thus ignoring the root cause of the situation.