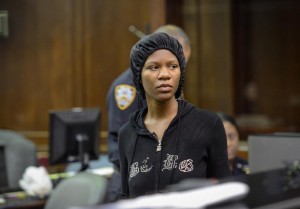 A shocking case of maternal abandon recently brought grief to the hearts of America. The case involves 20 year-old Frankea Dabbs, who chose to leave the stroller containing her 7-month old daughter Mylanea on the platform of the Columbus Circle subway station in NYC. Dabbs had been traveling with her baby on a 1 train from uptown. After abandoning the stroller, she continued on with her journey. The incident occurred on Monday and by Tuesday the mother had been brought in for an arraignment.

On Tuesday, the homeless 20 year-old mother was accused of abandoning her daughter, Mylanea Love Edmonds, as well as of acting injuriously toward a child aged younger than 17, say police sources. After the arraignment, she was detained in custody, without a possibility of posting bail. Her next court date is July 11.

The woman, who will turn 21 in a few days, had recently left North Carolina and arrived in New York with her infant daughter. Her behavior during the arraignment, which took place at the Manhattan Criminal Court, was bizarre to say the least. First, the woman asked a TV cameraman if his camera was on and then she proceeded to spurt out curse words at world famous, Brooklyn-based rapper Jay-Z. “Tell Shawn Corey Carter that I said f— him. Piece of s—”, the woman said, all the while using the performer’s actual name.

According to her relatives, Dabbs has a troubled past, some serious mental health issues, and a need for professional assistant. Many of her relatives attested to this, as well as to the fact that she has a history of having worked as a prostitute. Additionally, she was thrown out of the home of her stepfather. According to the young mother’s own father, Franklin Dabbs, only a few months ago, Mylanea’s father was killed during a robbery. Dabbs’ aunt, Lawanna Edmonds told the New York Daily News that Frankea didn’t simply abandon the baby. She added that, in her view, “the child is looking for help”. Edmonds also stated that she believes Frankea suffers from mental health issues. “She walks around with dark shades… She even sleeps in dark shades. I really believe there is something mentally wrong with Frankea”.

Dabbs herself also made some statements to the police, regarding the incident. She told the authorities that she was unable to care for her daughter any longer. As of this writing, little Mylanea Love had been placed in the custody of the city Administration for Children’s Services.