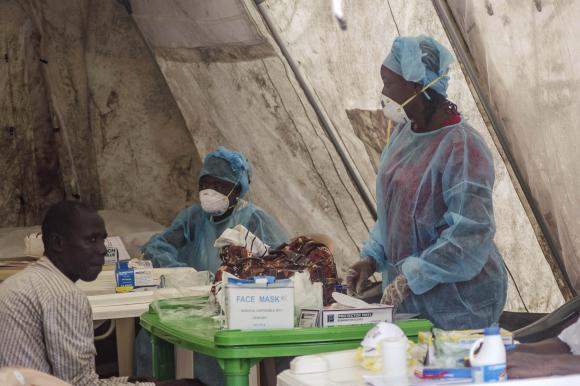 On Friday, thousands marched on the Ebola treatment center in Sierra Leone where a nurse had alleged that the Ebola virus was invented as a solution for concealing “cannibalistic rituals” at the ward. Outside the main Ebola hospital in Kenema, Sierra Leone, angry crowds took the treatment center by storm. Inside this hospital in the remote east, dozens are currently being treated for the virus. Protesters threatened to remove the patients from the hospital and burn it to the ground.

Across the three countries plagued by this virus (Guinea, Liberia and Sierra Leone) more than 660 lives have been lost because of the illness. The World Health Organization fears that this burden places great strain on the health systems o some of the poorest countries in Africa. Sierra Leone has now surpassed Guinea and is currently the country with the highest number of diagnosed cases (454) of Ebola.

During the protests, police tried dispersing the crowds by using tear gas. Crowds also claimed that a nine year old boy has been shot in the leg by a police bullet.

Regarding this unique situation, Alfred Karrow-Kamara, Assistant Inspector General explained that protests were sparked by a former nurse who had been working in the treatment center who spoke about the virus in a local fish market. She had claimed that the Ebola virus was nothing more than an unreal excuse, a gimmick designed to cover up cannibalistic rituals. The Assistant Inspector General assured the public that calm was now reigning in Kenema and that a strong armed police force had been placed around the clinic and police station to ensure that activities could be carried out normally.

The Ebola virus is highly contagious and can kill up to 90 percent of infected individuals, although the current outbreak has an approximate kill rate of 60 percent. Symptoms vary from vomiting and diarrhea to different grades of internal and external bleeding.

Ernest Bai Koroma, the President of Sierra Leone declared on Saturday that he will see to it that the government intensifies activities and interventions meant to contain the disease and prevent it from spreading. He also said that his aim is to end the disease within 60 to 90 days.

According to the WHO, efforts to contain the Ebola outbreaks are hindered by poor health infrastructures as well as lack of man power. Additionally, fear and mistrust towards health professionals can further hinder the efforts that epidemiologists and other experts are putting into treating and preventing the disease, as Sierra Leone citizens tend to have more faith in traditional medicine than in allopathic medicine.