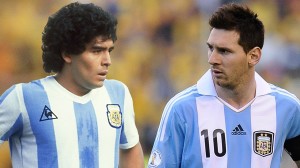 Though FIFA’s decision of giving Messi the Golden Ball after the recently completed FIFA World Cup didn’t surprise too many, there are plenty of dissenting voices out there. One of them is none other than legendary Argentinian player Diego Armando Maradona. In a recent statement made during his TV show on Telesur, the iconic soccer player said that, judging by Messi’s performance at the sporting tournament, he did not deserve the award. His precise words were: “I would give him heaven if possible. But it’s not right when someone wins something that he shouldn’t have won just because of some marketing plan”.

Messi, who is currently one of FC Barcelona’s star players, won out by beating several others hot contenders; among them stood Dutch captain Arjen Robben, as well as Thomas Muller and James Rodriguez. Messi’s topmost performance at the 2014 FIFA World Cup was scoring four goals in seven games. The 27 year-old player is credited with having played a major role in leading Argentina to this year’s final. Yet Maradona, as well as many other football fans from around the world, see this decision as a marketing strategy.

Aside from his criticism on giving Messi the Golden Ball, Maradona also expressed his disappointment regarding Argentina’s loss in the final on Sunday. The team won 1-0 after German Mario Gotze scored a goal during the second round of overtime. “I feel sorry for my country. Mario Gotze’s goal really hurt. There’s a huge sadness in my heart that we lost the final. All things put together, I think Argentina deserved at least penalties. That Germany won was the result of a misunderstanding in the Argentine defense.” Judging by the distraught expressions on many Argentinian supporters’ faces, Maradona’s sadness is certainly shared by other fans.

Maradona, who won the World Cup with Argentina in 1986, was also critical of some other decisions taken by Argentina’s boss, Alejandro Sabella. The legendary player said it was a bad idea to replace Ezequiel Lavezzi at halftime. Lavezzi, whom many dubbed Argentina’s actual star player during the first half of the final against Germany, was replaced with Sergio Aguero. Maradona praised Lavezzi and added that Aguero failed to match the former’s performance. “I don’t understand the substitution of Lavezzi. He was phenomenal down the wing. Kun Aguero didn’t have the same impact. It was not his tournament,” the player turned talk-show host explained.