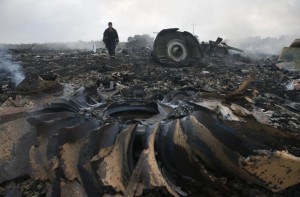 The situation concerning flight MH17 is still tense as government officials are trying to uncover what exactly happened in the airspace over eastern Ukraine on Thursday, July 17th, as an airplane with over 295 people on board crashed. On Friday, U.S. President Barack Obama confirmed the presence of at least one American on the plane.

During the press conference that took place in Washington, president Obama expressed his distress in regards to the tragedy that caused the loss of so many lives. He did not only describe this situation as a “global tragedy” but also warned viewers that the entire world has its eyes “on eastern Ukraine”. Under such harsh global scrutiny, it’s clear that there will also be a lot of efforts put into making sure that the truth about the plane crash will be uncovered and presented to the public.

Obama also acknowledged the steady support that Ukrainian separatists have been receiving from Russia. According to his statement, it is a well-known fact that they have been constantly receiving Russian support that involves not only heavy weapons and training but also anti-aircraft weapons. In light of this knowledge, the American president urged for an immediate ceasefire that would involve the region between Russia and Ukraine. This ceasefire should allow that thorough investigations be conducted.

Recent information has confirmed that all people on board have been killed (a total of 298 passengers). Currently it is confirmed that there were at least a dozen nations represented on board (not just vacationers but also students and scientists that had planned to attend an AIDS conference held in Australia). Out of the total, however, the majority of passengers (189) were from the Netherlands.

During an emergency meeting of the U.N. Security Council, Samantha Power (U.S. Ambassador) directly expressed her disgust with the situation and stated that Moscow shoulders blame in spite of not having shot the missile themselves. Russian officials still deny having supported Ukrainian separatists. The Ambassador continued by stating that Russia has a big role to play in ending this war and that there are serious sanctions that could be taken against the country if such situations continue.

U.S. intelligence sources have indicated that the missile is likely to have been launched from the Ukraine and as such, an international investigation must begin immediately, Powers says, and it must be both complete and credible. She also warned that no member state of the United Nations should help in concealing the perpetrators and that justice must prevail.