You are here: Home / National News / Ku Klux Klan is Recruiting in South Carolina with Candy 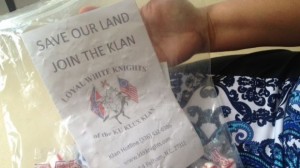 The Ku Klux Klan is alive and well in South Carolina and it is recruiting! The KKK is using the country’s illegal immigration crisis as a tool to recruit new members. How they do their new recruiting is almost unbelievable: they are leaving bags of candy on people’s driveways with notes inside that say: Save our land, join the Klan.

The piece of paper that asked people to join the Ku Klux Klan not only had the above slogan, but it also contained a telephone number that led to an automated message in which the KKK discussed their efforts against illegal immigration. The residents in northwestern South Carolina declared that they found the bags of candy on their street.

So, what happens when someone dials the white supremacist hotline? FOX Carolina did just that and they got the following message:

Be a man, join the Klan! Illegal immigration is destroying America. Always remember: if it ain’t white, it ain’t right. White power.

KKK recruiting isn’t anything new, because apparently they’ve been exploiting the immigration debate since the early ’00. Mark Pallok, Senio Fellow of the Southern Poverty Law Center, declared that these hate groups have focused on illegal immigration to try to get new members and instigate the public:

It’s pure opportunism. They spun it as a racial issue. The groups were fairly successful and they did grow based on their exploitation of illegal immigration.

Similar pamphlets have been found in South Carolina since March and also all over the Midwest, Texas, West Virginia, Pennsylvania and the Carolinas.

Pallok also said that older rhetoric against the Jewish, black and gay is something the Klan really using anymore. Their shift towards illegal immigration is indeed a new recruitment tool that could actually have a certain degree of success. Still, it appears that the KKK numbers are going down, as in 2012 there were 221 Klan chapters and in 2013, there were only 163.

A Ku Klux Klan rally is set to happen sometime later in July and as a response to it, many groups have planned their own Rally Against Hated in Greenville, South Carolina. If you plan on making an appearance to show your support against Klan, it will be held on Saturday, July 26.

What are your thoughts on this situation? Have you heard of any KKK activity where you live? Drop us a line in the comment section below, we would love to hear what you think about this particular story!