You are here: Home / National News / John Kerry Arrives in Cairo to Press for Cease-Fire in Gaza

The Americans are receiving pressure from Europe and Arab allies to intervene in the Gaza Strip. On Monday, U.S. Secretary of State John Kerry came to Cairo, Egypt in a bid to broker a cease fire between Hamas, the Palestinian militant group and Israel.

The visit came following President Barack Obama’s push to bring an end to the fighting, as the growing number of deaths in Gaza raised serious concerns:

It now has to be our focus and the focus of the international community to bring about a cease-fire that ends the fighting. Obviously it will not be easy.

U.S. officials who are traveling with the U.S. Secretary of State have said that the politics of the Middle East have changed significantly since Obama administration intervened in 2012 between Israel and Hamas. 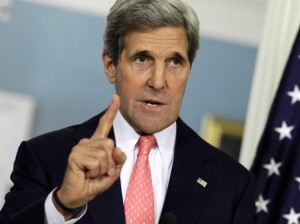 Although nothing official has been said by either sides, Israel officials indicated that an interference from the U.S. will not do anything to stop them from finishing their mission, which they say is to destroy Hamas’ tunnel networks.

The U.S. officials also said that Arab states aren’t quite sure on whether or not to intervene and that Abdeel Fattah Al Sisi doesn’t have a strong grip on Palestinian fighter as the West would like to believe.

The Secretary of State isn’t quite welcomed in the area, as Michael Oren, former Israeli ambassador to Washington, declared that Benjamin Netanyahu’s government didn’t invite John Kerry to try and broker a cease-fire. Mr. Kerry is likely to not travel to Israel or to Middle Eastern countries which are known to have close ties to Hamas, such as Qatar and Turkey.

The royal family of Qatar and Recep Tayyip Erdogan, Turkey’s prime minister, are long backers of the Muslim Brotherhood, an extremist Islamist movement which is known as the parent organization of Hamas. Last year, Egypt’s Brotherhood movement was overthrown as an effort to decrease the power of the organization in the region.

The U.S. officials traveling with John Kerry said that the Secretary of State is going to seek to build on the Egyptian plan to attempt to forge a regional consensus, but the American diplomats admitted that it wasn’t going to be easy.

What are your thoughts on what is happening now in Gaza? Have you been watching the news and are up to date with everything? Share your thoughts with us in the comment section below, we would love to hear your comments on this.