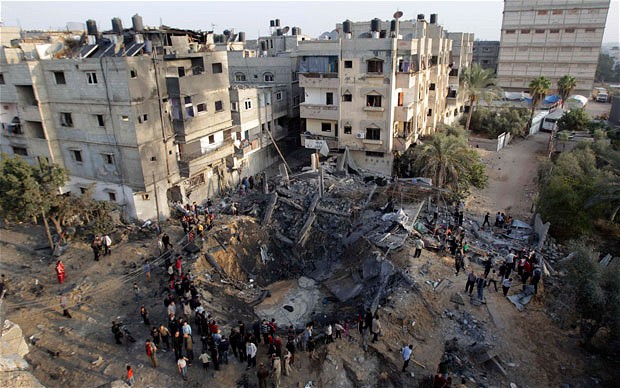 Monday brought with it new fighting as Palestinian fighters crossed from the Gaza Strip and ended up into an Israeli village. There, a gun battle was fought in spite of the Muslim Eid al-Fitr festival (which should have represented an unofficial truce day).

During this armed clash, five gunmen were killed according to Israeli television. Similarly, the Islamist Hamas movement took credit for 10 dead Israeli soldiers. These events have clearly lowered hopes for those trying to turn the temporary ceasefire into a long term one.

The attack took place at Nahal Oz, a village located east of Gaza City. After the clashes took place, the Israeli army warned thousands of Palestinians residing in areas surrounding Gaza City to flee their homes and such warning have been issued in the past, just before retaliatory strikes took place.

Apart from this incident that caused army flares to illuminate the night’s sky over Gaza, there were other events that would further shake the fragile truce between the two sides. In northern Gaza eight children and two adults lost their lives in an explosion that also caused serious wounds to 40 adults. Residents believe that this explosion was generated by an Israeli airstrike. Israel denied having shot the missile and explained that Hamas militants had fired a rocket that had misfired. Correspondingly, four Israelis were killed in mortar file shot by Palestinians from across the border.

Whenever Israel had an opportunity of explaining their attacks, they insisted that attacks would only be launched when Israel would be fired upon. Israel also accused Palestinians of having launched more than 17 rockets across the border.

Monday should have been an unofficial truce day, as Hamas Islamists called for a pause that would coincide with Eid, a holiday marking the end of the one month long Ramadan fast. On the 21st day of the bloody conflict, attacks took place in spite of this truce.

Residents of the Beach refugee camp garden explained that pools of blood now lie where children would play with their toys. They added that as they were coming out of the mosque, they saw as a missile landed where their children would play.

Another blast was heard at Gaza’s main Shifa hospital, thankfully not causing any casualties. Israel explained this attack differently this time: instead of accusing Hamas fighters of hiding within the hospital walls, they claimed that this was an errant militant missile.