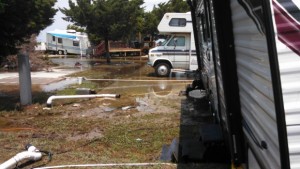 Although Arthur is no longer considered a hurricane force, its heavy rains and strong winds have managed to leave 250.000 businesses and homes powerless. The storm continued its path to New England, but not without causing some destruction in its path. At the moment, specialists say that it is not even a category 1 hurricane anymore (when it reached North Carolina’s Outer Banks, on Thursday it was considered still a category 2 hurricane). By the time it reached Atlantic Canada it was already downgraded to a tropical storm.

The hurricane passed through North Carolina while inflicting minimal damage. It continued its road northeast, towards Moncton. New Brunswick. Over 140.000 customers in Nova Scotia and an additional 110.000 from New Brunswick were left without power because of the heavy rain and strong winds that Arthur brought to Canada. Nova Scotia Power declared that most of its customers were without power during mid-afternoon Saturday, while New Brunswick’s main electrical utility reported several outages during the same time. Both companies alerted their clients that they could be left without power for up to 48 hours due to the rainfall and winds caused by Arthur. There were also around 20.000 North Carolina homes and businesses which reported power outages and downed trees, but no real damage.

According to Canadian hurricane Centre spokesman, Chris Fogarty, the rainfall will continue to drop as predicted, and most probably drench New Brunswick, but the winds are easing down. This can only mean that things will get back to normal very soon. In addition to this, Police in Saint John, New Brunswick, says that some of the local roads are closed due to floodwater. Arthur may not cause as much damage as a category 2 hurricane, but it has managed to delay flights, and even lead to their cancellation. Authorities report that the storm has caused flight cancellations and delays at the largest airport in the region: Halifax, Nova Scotia.

If you take a closer look to the south, to the beaches of North Carolina, you will also see traces of Arthur passing by there. It lashed out with its spiteful winds and heavy rains, and managed to destroy most of the state’s coast in the process.

While it is great news that the Arthur hurricane was downgraded to a tropical storm, it has still managed to cause some damage. Luckily, New England was spared from its wrath, and most of its effects were confined to North Carolina (Hatteras and Ocracoke islands), and Nova Scotia.

Dustin Jordan, a meteorologist in Caribou, Maine says that there is no need to worry. The storm will continue to wind down as we reach the afternoon hours.