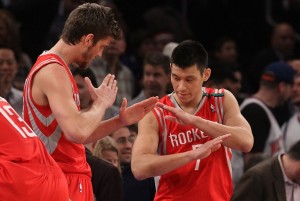 As fans of the team area already well aware, the Houston Rockets haven’t been having too good an offseason; in fact, by most accounts it’s been a complete disaster. All-star player Chandler Parsons has now been removed from the team’s line-up, to join the Dallas Mavericks. The move was completed through restricted free agency. Parsons is the third all-star player to leave the team, following in Jeremy Lin and Omer Asik’s footsteps. As of this writing, the Rockets still have two all-stars playing under their colors and have also completed an exciting new transfer. There is still hope that the team will make its long awaited comeback – though most commenters agree that it’s been a weak season for them, compared to the previous one.

In terms of player trade-offs, the plan devised by Daryl Morey was complicated enough from the get-go. Morey first announced the team’s intention of signing up Carmelo Anthony. That leg of the plan panned out (and was also panned by the pundits), since it had little to do with the team’s actual capabilities. Morey eventually replaced Anthony’s name on his wish-list with Chris Bosh. To free up space for Bosh, he traded Asik with the New Orleans Pelicans and Lin with the Lakers. Morey seemed hell-bent in his intent of adding on a third star to the offseason line-up: he stated that they would sign Parsons on, irrespective of how tempting an offer the Mavericks would make the player. However, the surprise came from Chris Bosh, who, right after the LeBron James decision announced he would be going to Miami. Then, Carmelo Anthony gracelessly informed the Rockets that they don’t have what it takes to sign him on. And that spelled the end of Morey’s plans to turn the Houston Rockets into a championship player this season.

Once the waters cleared, the trade outlined above, which involved three teams, not just two, worked out with Trevor Ariza, instead of Bosh or Anthony. This, of course, is better than nothing, but it also means that the Rockets lose all-star player Chandler Parsons. The bill for both players would have amounted to a staggering $23 million, which is simply unaffordable for the Houston team – and also not really worth it for any team of their caliber. Parsons alone would cost $15 million and, at least according to some, Ariza is also a good choice as a small forward. Two small forwards in a single trading offseason would have simply been a strange idea. Meanwhile, the Mavericks are strengthening their own lineup, announcing more trouble ahead for the Rockets. Time alone will tell what will come of the Houston team.