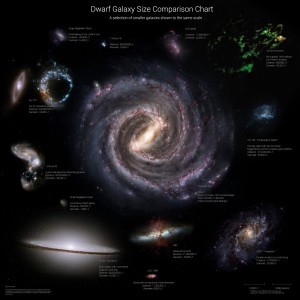 Astrophysicists have come to a new understanding of galactic motion and they’re apparently awestruck by the new and challenging discoveries. Galaxies have their own sense of rhythm, researchers have concluded, as they uncovered how they move around other galaxies.

It seems that galaxies “dance” around their giant counterparts in a disc-like pattern. This discovery isn’t supportive of the conventional model that explains galaxy movements (it stated that smaller galaxies had a tendency of swarming around larger ones).

Don’t be fooled, though, by the term dwarf galaxy. Even they contain billions of stars so they are not meager by interstellar standards. The research that has concluded that this dance-like movement occurs has started in 2013 when astrophysicists discovered that countless dwarf galaxies surrounding the Andromeda Galaxy (our interstellar neighbor if you will) were moving along a massive plane. As Prof. Geraint Lewis of the University of Sydney described, the plane is 300,000 light years in width and over a million in diameter. Noticing that this discovery didn’t coincide with the astrophysicists’ expectations, Lewis went even further in his research of orbiting galaxies.

Using data found in the Sloan Digital Sky Survey, scientists studied the properties of galaxies and uncovered many “dancing dwarves” that possessed “oppositely directly velocities” as they were coming near the opposite sides of giant galaxies, as prof. Lewis explained.

The Australian astrophysicist was bewildered with the results of his research and said that there was a notable coherent and coordination motion in every location that he and his team investigated during the time of the study. As a member of the international team conducting the research, Lewis could oversee the proceedings and analyze exactly how findings differed from the already accepted theory in which galaxies interact.

From their current findings, Lewis sought it possible to extrapolate the results and determine the universal nature of these so called “dancing dwarf galaxies”. He and his collaborators could not only determine the circular planes in which these galaxies move, but also calculate the motion pattern that they follow in approximately 50 percent of the galaxies they studied.

What this new study has brought in the world of astrophysics is a cosmological conundrum because it is challenging the established notions about the inner workings of the universe and goes to question absolutely everything we know so far. The study is challenging absolutely everything, even the nature of dark matter, Lewis affirmed. The study was published in the journal “Nature”.