You are here: Home / National News / Fireball Caught on Tape in the Central Virginia Skies

The American Meteor Society “Fireball Page” constantly provides with updates sent from concerned citizens. They include sightings of meteors and other objects in the sky. The organization encourages visitors to report anything unusual, and recount as many details as possible (example: brightness, length across the sky, duration, color etc.). The Fireball Page exploded today after reports of a huge fireball sighted in Virginia, North Carolina, Delaware, Maryland and Pennsylvania started rolling in. The reports came faster than any other sightings in the past few months. 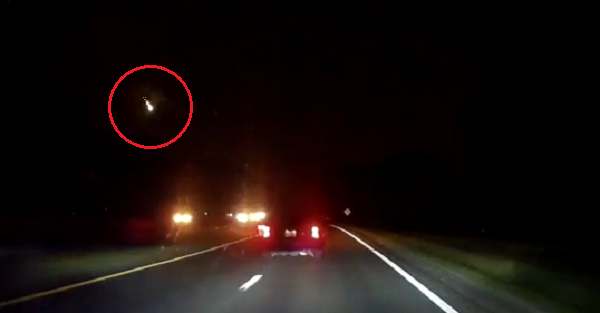 Most of the reports are similar to that of Peter, from Chester:

“It was the brightest I’ve ever seen. I even heard a boom.”

But how exactly does one identify a meteor, in order to properly report it? According to the American Meteor Society, a meteroid represents a “small” chunk of rock or ice that floats around space until it collides with the Earth’s atmosphere. Once this happens, a light effect takes place, and the rock/ice is pulled by the planet’s gravitational’s force. Approximately 99.9% of meteors evaporate or vaporize in the atmosphere, but there are some which manage to penetrate it, and collide with the Earth. This was the case with tonight’s fireball.

Astronomy enthusiasts and curious residents will be happy to know that Dan Perjar, a software developer at N.C. State University manage to catch the descent of the meteor on camera. He has footage of it on his dash cam, which he quickly posted on Youtube.

Dan Perjar stated that he was driving on Interstate-440 (heading from Cary to N.C. State) when he saw the huge fireball in the sky.

“Just a normal nighttime drive and I saw this, looked like a firework initially, shooting really kind of flat. It wasn’t really coming down. It looked like it was going across.” he declared

There is no doubt about the veracity of the video. Already over 100 people have reported seeing it. Reports have come from North Carolina and all the way down to New Jersey. The conclusion is that the location of the sighting is Virginia.

Michael Hankey, of the American Meteor Society says that, as it was coming down, the meteor was surrounded in a lot of light which made witnesses feel as if it was happening in their back yard. In reality, the object was extremely far away.

The most interesting thing about this sighting is the fact that fireballs rain down from the sky every day, but witnesses should consider themselves lucky to even see one. Most meteors that reach the surface of the Planet are the size of peanuts. The fact that over 100 people reported seeing this meteor is a miracle in its own right.