You are here: Home / Sports / Ex Vikings Punter Might Sue for Anti-Gay Slurs 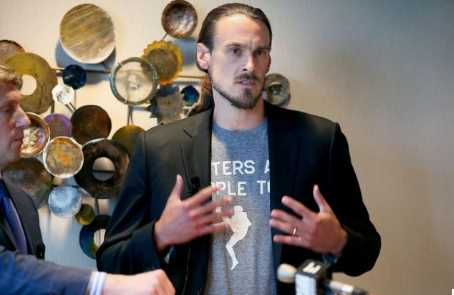 Chris Kluwe, a former punter for the Minnesota Vikings, is now threatening to sue the team, on account of alleged homophobic remarks made by a member of the team’s staff. According to a statement made Tuesday by Kluwe’s lawyer, Clayton Halunen, the ex Vikings punter might sue because of an assistant coach, who allegedly behaved in an anti-gay manner, in Kluwe’s presence. The player says that the coordinator of the special teams, Mike Priefer, uttered anti-gay slurs and taunted him, in an attempt to silence his vocal statements of support for gay marriage. The coach has denied the accusations. In May 2013, at the end of his eighth season with the Minnesota Vikings, Kluwe was eliminated from the team’s lineup.

The former punter is now taking legal action in this issue and seeking to obtain a copy of the results of an internal investigation conducted by the team. Kluwe’s purpose is to make these results public, if possible. According to Halunen, representatives of the Minnesota Vikings had initially made a pledge to publicly release the report that followed the investigation. Now, Kluwe and his legal team are accusing the Vikings of going back on their word, because the team reportedly knows the results of the investigation would prove Kluwe’s allegations are true. What’s more, the player has stated that by keeping the report private, the team is endorsing discrimination in the workplace.

The Vikings aren’t standing idly by either, in the midst of this scandal. They have contracted two outside lawyers, who are currently looking into Kluwe’s accusations. They also released an official statement on Tuesday, to deny that they had told the former player they would not release the investigation report during a Monday meeting. A new meeting between the two parties has been scheduled for this Thursday. “Issues relating to the investigation” are on the agenda for Thursday’s meeting.

The alleged event first became public through an op ed Kluwe published in Deadspin on January 2 this year. He described Priefer’s homophobic behavior, which had occurred throughout the 2012 season. He also claimed that the team had released him because of his open support of several social issues, including same-sex marriage. Kluwe’s piece was followed by a statement from Priefer, issued that very same day, in which he “vehemently” denied the accusations. Among them, Kluwe wrote, the coach had said “We should round up all the gays, send them to an island and nuke it until it glows”, during a team meeting in November 2012.