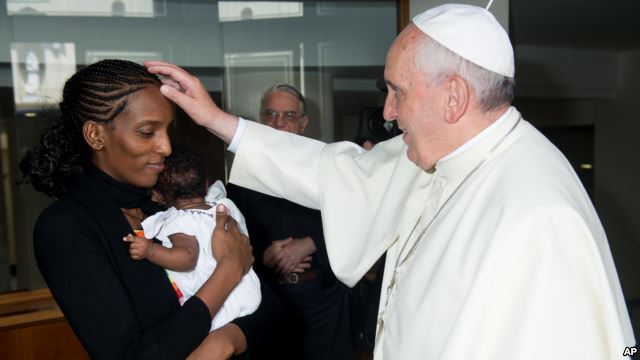 Mariam Yahya Ibrahim was sentenced to death for apostasy in Sudan when she married a Christian American, after being turned in to the authorities by her relatives. She converted from Islam to Christianity (as she was raised by a Christian mother after she had been left by Mariam’s Muslim father) and when she was asked to refuse her religion, the Sudanese woman had to face jail for not doing so.

In jail is where Mariam had to give birth to her daughter (and she did so in chains), while her husband was not allowed to come and see either of them for quite some time. Thanks to international outrage that was triggered by the death sentence that Ibrahim received, Sudanese officials decided to lift her sentence but as she was in the airport, Mariam was detained once again. According to Sudan’s government, the woman had been trying to leave the country with falsified papers.

Now that her ordeal is over, she finally was allowed to fly to Italy (as her departure was approved by Khartoum). Accompanied by Lapo Pistelli, Italian vice minister for foreign affairs, she flew on Thursday into Rome on an Italian government plane and met the Pope. Pistelli declared that a constant dialogue had existed between Italy and Sudan but couldn’t provide any further information regarding Ibrahim’s exit and the role Italy played in this resolution. As the plane was flying closer and closer to Rome, the vice minister added a photograph on Facebook with himself, Ibrahim and her two children. The photo description said simply: “mission accomplished”. Mariam Yahya Ibrahim walked off the government aircraft carrying her baby daughter and met Matteo Renzi, the Italian Prime Minister.

This courageous woman was then escorted together with her husband and their two children to a private meeting with Pope Francis in the Vatican. Father Federico Lombardi, spokesman for the Vatican, stated that Pope Francis expressed his appreciation and thanks for the witness to faith she showed. He went on to say that the half an hour meeting that Mariam had with the Pope was proof of the Pope’s desire to show closeness and solidarity towards all victims suffering for their faith.

Ibrahim and her family are in good health according to Pistelli and they will be staying in Italy for some days before finally departing for the United States. Christians everywhere are celebrating this moment, as the death sentence of Mariam weighed terribly within the community.