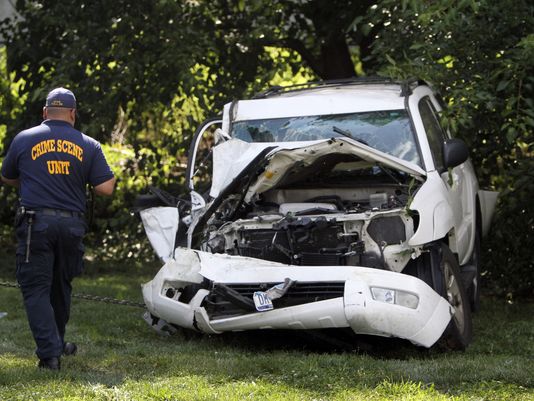 A massive manhunt was still underway on Sunday after two men stole an SUV and rammed it into a church fruit sale, killing three children in the process. On this third day that remained without results, officials offered a reward of $110,000 for any information that would lead to the capture of these carjackers.

Investigators explained that their efforts are put into apprehending the two suspects who, after hitting a family in Philadelphia and killing three children, fled the scene on foot. Keisha Williams, 34 and her three children (Keiearra Williams, 15; Thomas Reed, 10; and Terrence Moore 7) were participating in a church fundraiser and selling fruit when they were hit by the Toyota SUV.

James Clark, Homicide Capt. explained that the lives of three innocent children had been taken and that the city will offer $100,000 reward for any information leading to the arrest of the carjackers and an additional $10,000 if they would be apprehended by noon Monday.

Keisha Williams was hospitalized, as was a 65 year old woman who was helping at the fruit stand and another 45 year old woman who was carjacked at gunpoint. Police Commissioner Charles Ramsey declared his disgust for the situation, explaining that there are no words that could explain how he felt but that regardless of feelings, these two lawbreakers must be caught.

The police has some good tips thus far, but no concrete leads and this could seriously hinder their efforts of finding the two carjackers.

Investigators said that the two carjackers forced the Toyota SUV owner into the back seat at gunpoint and drove off with the car about a mile away from where the church fruit sale was taking place. They also believe that the crash might have been caused by a blown tire that could have occurred as the two carjackers were turning a corner at high speed.

The family involved in the car crash took an active role in the community garden that Mount Zion Church ran. Joyce Fisher, their neighbor, declared that they would take great pride in their garden and that they were working together with the church to raise money to build a playground.

Another neighbor, Jacquita Kelsey, said that the family had been living there for about three years and that Keisha Williams was always together with her children. She described them as a mother with “her little ducklings”.

The prayers of the entire community go out to this heartbroken family until the perpetrators are caught and brought to justice.